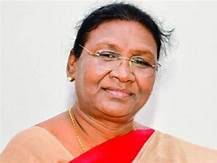 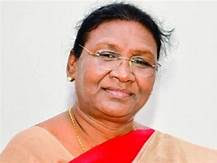 Given the numbers, the election of Draupadi Murmu (b. June 20, 1958) is a foregone conclusion. It took more than seven decades of the Republic before an Adivasi could reach the top post of the country. Ever since Murmu was fielded by the BJP led NDA as their candidate for the presidential election, discussions started about what her nomination signifies. Those who oppose her nomination point out that BJP is making it a habit of dabbling in crass symbolism. They point out that her nomination is merely one of BJP’s tactics to attract the Adivasi community into their Hindutva fold and also ensure support of the BJD. Some have gone further to question Draupadi Murmu about her stand regarding the saffron party’s Hindutva stand and where she stands in this regard.
However there is no denying that Draupadi Murmu is an inspiring figure in her own right. She belongs to the Adivasi Santhal community, is a soft-spoken hard-working politician who has risen from the ranks facing many personal tragedies. Her story resonates with many grassroots party workers across party lines because of her meteoric rise from the Nagar Panchayat to the Presidency. She started her career as a school teacher, taught as an assistant professor at the Shri. Aurobindo Institute for Integral Education and Research and also had a stint in Odisha’s irrigation department. Murmu started at the bottom, her first election being that of a Nagar Sevika of the Rairangpur Nagar Panchayat in 1997. Thereafter she was elected as MLA in 2000 and 2004 from the Rairangpur Assembly constituency and held several portfolios in the Odisha government. In 2015 she became the first woman governor of Jharkhand and went on to complete her tenure of six years.
The office of the President is rightly seen as a symbolic one where the President does not exercise any real powers apart from the directions of the Prime Minister and cabinet. Since it is a symbol in any case, let it be a symbol that is meaningful. There can be no denying that the elevation of Draupadi Murmu will inspire a vast number of women and Adivasi women and girls in the country.

‘What has she done for the Adivasis?’ ‘Will her becoming the President change things for the common Adivasis?’ – these are really presumptuous questions. Can we assess what changes came about in the lives of ordinary Muslims because Fakhruddin Ali Ahmad or Zakir Hussain became presidents or what changed in the lives of Sikhs because of Giani Zail Singh? One can only hope that she will use her position and power to usher in positive changes in the lives of the poor and marginalised.

Presidents of India have been called mere ‘rubber stamps’ in our parliamentary system although that is not always the right description.  Out of the fourteen presidents that the country has seen, perhaps the only one who may be regarded as being assertive and independent is K.R.Narayanan. He openly called himself ‘a working president’ and deviated from prevalent conventions and precedents many times. It is quite obvious that Draupadi Murmu may not scale the heights of K.R.Narayanan but there are many others who did not come close to that record either.

https://youtu.be/pYphDOuRPwM Two days back a group of thirty women from...