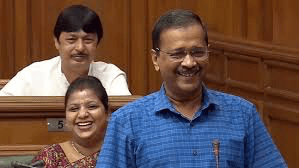 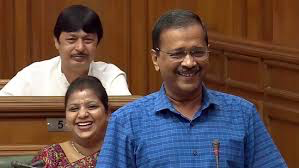 In the 1984 parliamentary elections Rajiv Gandhi led Congress to a resounding victory cornering 415 seats – a record that even the Modi lehar has not been able to breach. The mahoul at that time was solidly pro-Congress. Rajiv Gandhi had travelled a distance equal to one and half times around the earth during the campaign and wherever he went people welcomed him with open arms. They saw in him a young man whose mother had been brutally murdered – no power on earth could come between the voter and the panja. The electorate was not in the mood to hear a single word from any opposition leader. There was no question of the opposition taking potshots at the Gandhi family, of cracking jokes at their expense, at posing the slightest doubt about their virtues. Nobody could have gotten away with calling the scion of the Gandhi family the kind of rude names that have become common fare today.

Arvind Kejriwal’s speech in the Delhi Assembly on the ‘Kashmir Files’ and the subsequent attack on his house by BJP supporters reminds one of 1984. Today the mahoul is pro-BJP. The voters are returning them to power in state after state, such that pro-incumbency seems to have become the norm. It is a strange mahoul – the voters are ready to pay Rs. 100 for a litre of diesel and Rs. 1000 for a gas cylinder and yet chant ‘Modi Modi’.

This is certainly not the right time to poke fun at the BJP for sticking up posters of ‘Kashmir Files’. Yes they are pasting movie posters and by god they are seriously proud of it! Apart from any actual commitment they may or may not feel for the film, they are doing it because right now the electorate wants pro-Hindu sentiments to be worn on the sleeves. The electorate wants the netas to chant Hanuman Chalisa, declare themselves a janeudhari Brahmin and do the Chandi Path from the podium. All things ‘Hindu’ has become exceedingly sacrosanct, not open for comic interpretation by political leaders. The people are in no frame of mind to hear a single word from the opposition which remotely, even tangentially, questions  Hindu sentiments – leave alone the kind of sarcasm and potshots that Kejriwal displayed in the Assembly.  Did Arvind Kejriwal think he could make provocative statements questioning the zeal of the BJP supporters or the high moral ground of Vivek Agnihotri and not have the CCTV cameras outside his house broken?

Opposition must oppose, but without losing sight of the mood of the electorate. The time for mockery and sarcasm and political potshots may definitely come in the future, but today is not that time. Today the opposition parties are expected to put down their heads and just work.  In the states where they are not in power, the opposition has to build the party base with a positive agenda – again, voters are no longer ready to vote on the basis of fear factor alone.

In the states where they are in power like Delhi, Rajasthan, Maharashtra, Odisha or Chhattisgarh, the opposition has to work to build innovative models of governance. Incidentally, Arvind Kejriwal is doing one of the best jobs on this front, unlike others like the MVA in Maharashtra who have no governance model to showcase. Let the work show that you are different from BJP and leave funny speeches alone – the voters will buy the work, but not the funny speech. In fact, Kejriwal should have done whatever was in the power of the Delhi government to do for Kashmiri Pandits, even announce a special package for them, and that would have delivered a clear, sympathetic message to the voters. Right now the narrative isn’t playing out too well for AAP.

The good thing about Indian politics is that mahoul  can change any time. All that the opposition could do in 1984 was lick their wounds, work hard and wait it out. Ironically, the wind changed for the BJP with the India Against Corruption movement and a party with 2 seats in the parliament jumped to more than 300. Today’s opposition too has to work hard – and wait for the opportune moment when tides will turn. Meanwhile it wouldn’t do them good to alienate the people through unnecessary gags. In other words the Bhagavad Gina’s philosophy of  nishkaam karma might benefit the opposition parties – keep working steadily to win over the electorate. Kataksh, on the other hand, is a terrible idea.