Why is Chandrapur Wary of Vedanta Copper Mines?

The Social Cost of Mineral Wealth

Recently Vedanta company has procured two mining leases for the extraction of copper in Chandrapur district. According to the Directorate of Geology and Mining, Vidarbha region produces 75% of the total minerals in Maharashtra and Chandrapur district alone produces around 30% of the total minerals. The district has more than 50 mines for the extraction of coal, limestone, laterite, dolomite, iron ore, quatrzites and now we can add copper to this list.

The promise of jobs and employment is offset by the huge health and environmental costs paid by local communities something which is rarely taken into account. With every new mine the district suffers from severe pollution of land, air and water which threatens the lives of people, destruction of crops, displacement of population and serious damage to surface and underground water resources. People in the vicinity of mines regularly experience the tremors due to blasting and cracks develop in houses. Given all these past experiences people are wary of Vedanta. There is every possibility that Vedanta will bring more sufferings in the name of development.

Overburden dumps and floods: A majority of mines in Chandrapur operate in the Wardha, Penganga and Erai sub-basins. The debris that is removed from the top layers is often dumped by these water bodies. In 2013 Erai river had flooded and the damage caused was exacerbated due to the overburden dums of the Hindustan Lalpeth Colliery. Thereafter a district level committee was set up to study overburdens which showed tht the WCL duped overburden along a stretch of 2 kms close to banks of river Wardha. It was also found that the WCL had changed the course of flow of one of the nalas in the mining area. This situation has not changed much till today. The impact of the flash floods in Chandrapur district in the monsoon of 2022 was exacerbated because of the impediments caused in the natural drainage. In overburden dumped by the New Majri Coal mines on the banks of the Shirna river led to flooding of agricultural fields which destroyed standing crops. Water also entered the Majri village leading to serious damage to houses and livelihood.

Closed Underground Mines: In August 2022 a horrifying incident occurred in Amrai ward of Ghuggus when the entire house belonging to Gajanan Madavi disappeared into a 70 meter sinkhole. It was literally as if the earth had opened up without a warning and swallowed up the house. In the fearful days that followed the entire ward comprising of 160 households was shifted safer locations and the WCL was made to pay for the entire exercise.

It came to the fore that during the colonial times there were underground mines in the area which had been later abandoned. Some parts had been surveyed for the mines although actual operations had not started. The WCL had issued notices to warn the administration as well as the people not to construct houses in the area but these were ignored. On the contrary as people started to live in the ward, the gram panchayat and the administration provided all the civic amenities.

Thereafter in October 2022 the WCL issued notices to around 2000 houses in Chandrapur city in Babupeth, Babanagar, Lalpeth Colliery and Rayatwari Colliery areas which are constructed on WCL land and in which people have been living since the last forty to fifty years. It is said that many of the houses are built on closed underground mines. There is unrest around this issue and already political charges have been traded.

Problems at Surjagad (Gadchiroli):  L & T company has recently started operating the Surjagad mines in Gadchiroli thereby creating a host of issues in the area. The manner in which it is being thrust upon the local people has led to resistance in both Gadchiroli as well as Chandrapur district. The mines are located deep in Adivasi area and were opposed by the tribal communities. The Gram Sabhas of the area had passed resolutions on grounds of not being taken into confidence in spite of the mines being in the PESA area where Gram Sabha sanctions are mandatory. The public hearings conducted by the administration ran into controversies as mediapersons alleged that they were not allowed to remain present.

The transport of the extracted ore has created health and pollution problems as heavily loaded trucks are entering villages. There have been many delegations by local people which have fallen on deaf ears. In September a lady was killed in an accident on Ashti-Allapalli road after which angry villagers of Shantigram set eight trucks belonging to the mining company on fire.

Protest against Railway Siding – Since the last four months the people of Mul, a block town in Chandrapur district have been resisting the construction of railway siding for the use of Surjagad within the city. They fear excessive pollution, accidents and increase in social problems if the siding is built in this rural town. 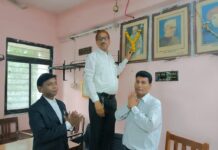