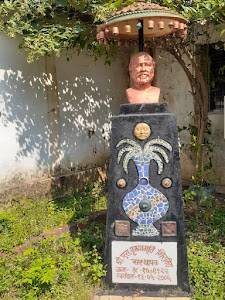 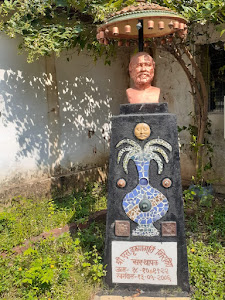 Who was S.K. Mirmira?

Hundreds throng to the small town of Bhadravati in Chandrapur district to see its places of worship which are thousands of years old. Far fewer people take the narrow lane that swerves to the left off the main road to pay a visit to ‘Gramodaya Sangh’.  But if you do reach the place, an unassuming premise welcomes you with an old board that reads ‘Regional Pottery Training Centre’.  Low rooms with tiled roofs girdle a lawn – the place has a distinctly old-world charm, as if time has stopped there. As you enter the gate a bust shielded under a terracotta chhatri is bound to catch your eye. It is the statue of S.K. Mirmira, who founded ‘Gramodaya Sangha’ in 1955 under the chairmanship of R.K. Patil, committed Gandhian and a State Minister of the Central Provinces.

My curiosity about S. Krishnamurthy Mirmira led me to know more about this austere Gandhian stalwart who dedicated his life training traditional artisans in appropriate technology to help them survive in the competitive marketplace.

The story of Gramodaya is intimately linked to the experiments in rural reconstruction conducted by Mahatma Gandhi and Rabindranath Tagore in two different corners of India. Shantiniketan, founded by Tagore in 1901, was already a flourishing centre of learning and arts when Gandhiji came to live in Sewagram in 1936.  He visited Shantiniketan several times during which time he had long discussions with Gurudev about the education being imparted in Shantiniketan and what kind of education would be relevant in free India.

Shantiniketan left a definite impact on Sewagram Ashram especially in Gandhiji’s educational philosophy of Nai Talim (Basic Education) which placed equal emphasis on the hands, heads and hearts of the students. Tagore’s long time associate Dr. Edward William Aryanayakam and his wife Ashadevi Aryanayakam (nee Adhikari) were invited from Shantiniketan by Gandhiji and this couple was instrumental in giving shape to Gandhiji’s Nai Talim philosophy. 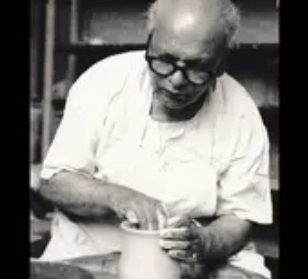 The first art teacher at the Nai Talim school, the great multifaceted artist Devi Prasad was also from Shantiniketan. He had trained there under masters of the Bengal School such as Nandalal Bose and Ramkinkar Baij. Nandalal Bose encouraged Devi Prasad to participate in the freedom struggle. Devi Prasad not only participated in the Quit India movement in 1942 but later he joined the Nai Talim school in 1944 and initiated the Kala Bhavan where, apart from other things, he worked on pottery with an emphasis on using local clay and materials.

S.K. Mirmira joined Devi Prasad a few years later in 1948 and went on to head the pottery section in Kala Bhavan. S. K. Mirmira was born in 1925 and was a student of Ceramic Technology in Bangalore Polytechnic when he joined the Quit India movement and was jailed for several months. Later as an apprentice in a porcelain insulator factory, Mirmira came under the influence of the stalwart Gandhian Dr. J.C. Kumarappa who was associated with the All India Village Industries Association at Sewagram. In 1948 Mirmira started work at Sewagram alongside Devi Prasad and Kalindi Jena. All these pioneers were artists in their own right and could have run their own studios. But Gandhiji’s emphasis was on introducing sustainable technology which could help local crafts and craftsmen flourish, and therefore their art was more for society’s sake than for their own. Both Devi Prasad and S.K. Mirmira joined Acharya Vinoba Bhave during the Bhoodan Movement (Movement for Voluntary Gift of Land) which started in 1951. They walked miles with him throughout the countryside. During their tour Mirmira studied the impoverished socio-economic condition of traditional rural artisans of Central India.

After the Bhoodan movement, Mirmira left Sewagram and selected Bhadravati village of Chandrapur district as his workplace because of the availability of raw materials for pottery and also a large community of potters. 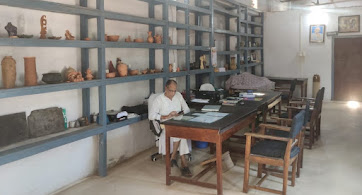 The austere Gandhian in his spartan office

Initially Mirmira experienced the entrenched casteism in the area when the local potters showed disinclination towards making bricks even though these had a market because bricks used to be made by Dalits. Mirmira persevered and eventually the local potters trained in various products like tiles, building materials and martabans or lidded pickle jars. Mirmira had the foresight to understand that traditional pottery was losing market to other raw materials and therefore he introduced glazed terracotta-ware and whiteware. 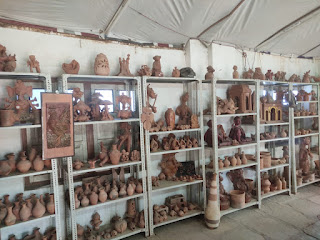 Mirmira encouraged trainees to form cooperative institutions and by 1991 six producer cooperative societies with 300 artisan members had been started which produced for markets such as construction of roads, schools, latrines etc. in the rural areas. Similar cooperatives were also started by trainees from other states such as Chhatisgarh, Andhra Pradesh and Kerala.

After studying the pottery technology of several countries Mirmira wrote the book titled ‘Indian Pottery’ in 1973. In the 19990s the Gramodaya Sangh offered special workshops sponsored by CAPART which allowed interactions between traditional potters and studio potters like Primula Pandit and Latika Katt. 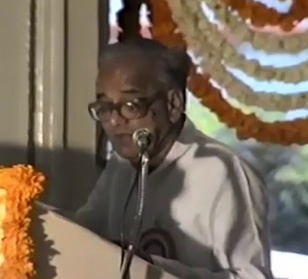 In 1991 S.K. Mirmira was felicitated with the prestigious Jamnalal Bajaj Puraskar for the application of science and technology for rural development. From the very initial days Mirmira lived in a tiled kutir inside the 9 acres campus of the Gramodaya Sangha. He died there in 2006. A true Gandhian, Mirmira led a meaningful life of quiet, steady service and his departure too was as soft as the fall of an autumn leaf.

The work of the Gramodaya Sangha is continuing under the new leadership led by president of the organization Jeetendra Choudhary, vice-president V. C. Prakash, Secretary Ayub Hussain and others. The team has brought in a range of courses for new generation of varying durations from as short as a week to several months. Around 400 persons are trained every year from various states of India and are supported for employment or self-employment. 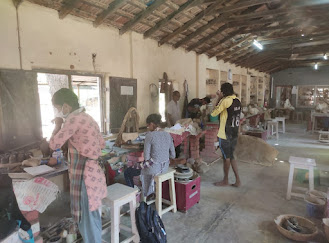 Jeetendra Choudhary remembers Mirmira with great reverence. “Mirmiraji’s hallmarks were great simplicity and total honesty. He came to Bhadravati all the way from Bangalore and lived his entire life for the people here. We remember him on his birth and death anniversary every year. Gramodaya Sangha has instituted an award for outstanding artisans in memory of S.K. Mirmira which is given to one man and one woman trainee every year. He was a man who made only friends in his life – no enemies.”

Although S.K. Mirmira is no longer with us, his soul continues to live through the work of the organisation he founded. And indeed the town of Bhadravati was blessed to have seen the efforts of this Gandhian pioneer who committed his entire life for the betterment of traditional artisans across the country.

The Beauty of Ceramics

Will the Agnipath Protests Scorch the BJP ballot box?

(picture from internet)   The Modi regime has been marked by...

Poster sponsored by the family and friends of the...
TOTAL PAGEVIEWS
VGThe VidarbhaGazette