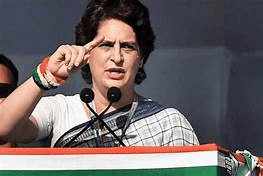 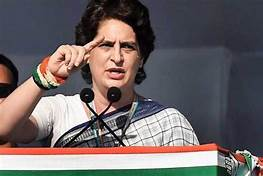 On 14th December Smt. Priyanka Gandhi is coming for the first time to Vidarbha. Her chosen destination is the predominantly Adivasi district of Gadchiroli. Unfortunately, the visit it marred by speculation arising from the fact that her visit is not organized by the Congress Party but by Vijaykiran Foundation named after the Congress minister Shri. Vijay Wadettiwar and his wife Smt. Kiran. According to sources within the party who wish to remain anonymous, the programme was finalised singlehandedly by Shri. Vijay Wadettiwar without informing Shri. Nana Patole, the Chief of MPCC or Shri. H.K. Patil the in-charge in AICC for Maharashtra. It is further disclosed that although Shri. Vijay Wadettiwar is the sitting MLA from Brahmapuri and the Guardian Minister of Chandrapur district, he chose to organize the function in Gadchiroli in order to prevent Shri. Suresh Dhanorkar, the sole Congress M.P from Maharashtra from getting any importance in the programme. In fact, it is not only Shri. Suresh Dhanorkar, but the programme was designed to keep away all of Shri. Vijay Wadettiwar’s ‘political opponents’ in Chandrapur district including the two other sitting Congress MLAs Smt. Pratibha Dhanorkar and Shri. Subhash Dhote. There is a distinct discomfort in the rank and file of the Congress Party that party protocol has been set aside by the heavyweight politician in this exercise for self-promotion.

The visit was announced in a press conference addressed by Shri. Vijay Wadettiwar and according to media reports the primary focus of the programme will be the distribution of 15,000 e-cycles by the Vijaykiran Foundation sponsored by CSR funds from various industries. While this is a laudable objective and certainly the women of Gadchiroli will benefit by having an e-cycle, the lack of transparency in the entire funding is also being discussed. The main question being raised within Congress ranks is that since Gadchiroli does not have any industries, which industries have allocated CSR funds for distribution of e-cycles in that district? The matter has raised quite a few eyebrows in the area because the amount involved is a whopping Rs. 30 Crores. (15000 @ Rs.20000 per e-cycle). “Which industries have given Rs.30 Crores to Vijaykiran Foundation for e-cycle distribution?” This is a question that is being whispered in local Congress corridors.

There are also some questions for the central leadership of the party. Each and every party in the country has factions and internal competition between local leaders. But a strong central leadership is expected to reduce the factionalism and strengthen the party internally. Why did Smt. Priyanka Gandhi not understand that attending a programme organized by Vijaykiran Foundation would only fan the factional flames? To further complicate matters, there is a public perception that the programme is being organized by Shri. Vijay Wadettiwar to launch his daughter Kum. Shivani. While there is nothing new or objectionable in such ‘launches’, should it come at the cost of weakening the party? The tragedy is that Smt. Priyanka Gandhi may not come to Gadchiroli again for a long time in the future, and therefore this particular visit could have been an occasion for the Congress party to consolidate itself in the area. Indeed, Priyanka Gandhi’s visit to Gadchiroli – the poorest district of Maharashtra and one that is deeply scarred by violence inflicted by Maoists and state agencies – would have only gained in importance if it would have been organized by the party.

It is not clear whether apart from the rather limited agenda of e-cycle distribution, Smt. Priyanka Gandhi will give time to the people and issues of Gadchiroli. Hundreds have lost their lives in the violence that has lasted several decades, including the erstwhile District President of the Congress party and leader of the Adivasi Madia community Shri. Malu Kopa Bogami and Congress Zilla Parishad member Bahadurshah Alam. The district is a place of widows and orphans, left to fend for themselves after husbands and fathers were killed either by Naxalites or by the police. It will make a difference if Smt. Priyanka Gandhi with her imaginative slogan of ladki hoon lad sakti hoon makes time for the Adivasi women of Gadchiroli and listens to their sorrows.

There are also several live issues like that of the opposition to the Surjagad mines being opposed by Adivasis of the region. Will Smt. Priyanka Gandhi at least meet the representatives of the agitating Adivasis if not take a stand on the issue? Her position will be of immense significance given that her party is in power in Maharashtra. The on-going struggle of the Adivasis against Surjagad mines reminds us of the struggle of the Dongaria Kondhs of Niyamgiri. In that struggle Shri. Rahul Gandhi had visited Niyamgiri more than once and had declared himself to be the Sipahi of the Adivasis who would advocate on their behalf in Delhi. It remains to be seen whether Smt. Priyanka Gandhi becomes a voice in support of the people of Gadchiroli or she chooses to remain a mere medium for the launch of Shri. Vijay Wadettiwar’s political heir.