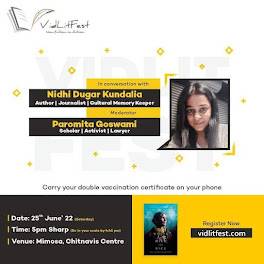 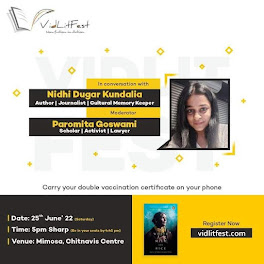 There is nothing more uplifting than conversations about books with book enthusiasts, and so  my afternoon yesterday was well-spent learning about the Vidarbha Literary Festival (VLF) based in Nagpur. Over a nice cup of coffee Sachin Jahagirdar, the secretary and Vinay Sarda the festival coordinator of VLF, recounted the origins and the journey of the festival. It all began, as many good things do, with a small group of friends who came together around 2015 to form a Book Adda Group to read and discuss management-related books. . The Adda today has capped its membership at thirty and the topics are no longer limited to business management.

“Right from the beginning we were interested in non-fiction – no fiction, no poetry and no self-help books. The group decides beforehand what to read. In the meeting some members present their reviews and then there is a discussion.” 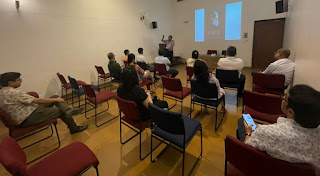 The Book Adda Group in session

So how did a book club lead to a literary festival?

Several members of the Book Adda Group loved books enough to travel just to attend literature festivals across the country – from Jaipur Literature Festival to Jashn-e-Rekhta in Delhi. At one point it crossed Sachin’s mind that Nagpur should have its own literature festival. Coincidentally the same thought came to Poonam Sarda as well. One thing led to the other and finally a group of fifteen people met over dinner at Poonam’s house. That was the beginning of the Vidarbha Literary Festival – the only festival in India dedicated to non-fiction. ‘Non-fiction in action’ is the VLF’s telling tagline.

“It was Vijay Phanshikar’s idea that we should confine ourselves to English because already literary festivals in Marathi, Hindi and Gujarati are organised in Nagpur,” says Sachin.

The group continued to meet in Cafe Shadows and planned for the first festival in February 2020. This was the first time that an English literature festival was organised in the city and too too on a mega-scale and understandably there was some nervousness.

“We had invited more than forty authors for simultaneous sessions over two days. But would we have people in the audience? Somebody asked me what number would make me happy. I said twelve hundred people over two days would be satisfactory. There were more than twice that number. I just couldn’t believe it…there was no place to park. Since that first day we never had to worry about footfalls.” Sachin adds with a note of pride in his voice.

“It is a celebration, not just a literary festival. People come from across Vidarbha. They drive down from Amravati, Bhandara and so many other places. It is a wonderful two-days that brings together people with like and unlike tastes come together. The best thing is you can never guess which topic will appeal to whom and who will turn up. In a talk by a historian about the importance of horses in Indian history, it was the horse-lovers of the city who turned up in numbers!”

How is the festival organised?

Before the festival mega-event in February, there are several run-up events in which a book is curated by the group and the author is invited to discuss the book and themes relevant to it. The VLF also provides a platform in the run-up event to emerging authors from Vidarbha to present their work. At the mega-event sessions are organised over two days. In 2020 the days were packed from 11 a.m. to 5 p.m. with as many as 24 sessions spread over the first day. 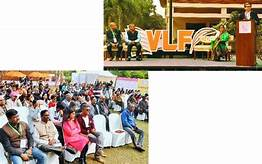 What makes the VLF special?

So many things sets the VLF apart. Firstly its focus on non-fiction as a genre which provides for a range of interesting topics and discussions.

“Our festival has explored topics from the farm crisis to issues of the LGBTQ community, to how television changed India to cooking and travelogue,” informs Vinay.

Indeed a glance to the festivals website (www.vidlitfest.com) shows an impressive array of themes. The festival has hosted important and interesting authors like Makarand Paranjape, Madhavi Menon, Vikram Sampath, Tony Joseph, Manu Pillai, Narayani Basu, Amardeep Singh, Jaideep hardikar, Kota Neelima and so on. The books titles discussed in the past give a glimpse of the spectrum of topics that the festival covers: Swami Vivekananda: Hinduism’s Road to Modernity, Early Indians, Shivraj Bhusan, Midnight’s Machines: A Political History of Technology in India, The Game of Votes: Visual Media, Politics and Elections in the Digital Era, Lost Heritage: the Sikh Legacy in Pakistan, Trees and Canopies: Trees in Indian Cities.

Yet another important thing that makes VLF distinct is the indredible support it gets from Nagpurians. “We raise money in this city and spend it in this city. This city is so great that no programme suffers for the lack of finance. The business community contributes generously to the VLF. There are professionals who give pro-bono service – the videography, the photography, the website, the online presence are all done pro-bono. And then we have a team of nearly hundred young, enthusiastic volunteers who ensure that the ball keeps rolling – that the festival posters are put up, the chairs are in place and the guests are well looked after. The VLF started with an idea but today the festival belongs to everyone and everything gets done in a team spirit,” informs Sachin.

On Saturday (25 June) VLF is coming up with its latest run-up event featuring the young, Kolkata-based author Nidhi Dugar Kundalia who will discuss her book White as Milk and Rice – a chronicle of India’s most isolated Adivasis, published by Penguin. While I look forward to this session, I am already waiting for the big mega-event in February 2023 – indeed the enthusiasm is contagious.