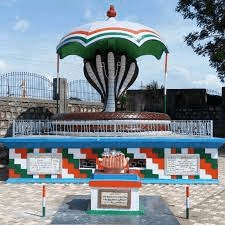 Countering the  ‘Azadi was Bheek‘ Propaganda

Remembering the Revolutionaries of Chimur

The bestowing of a Padmashree, the fourth highest civilian award conferred by the Republic of India, means that the statements issued by Kangana Ranaut can no longer be dismissed as the ravings of a lunatic. In fact it is a matter of concern that her latest averments about India getting bheek in 1947 is being echoed by the likes of Vikram Gokhale. It is the classic Goebbels strategy – keep repeating a lie till it sounds like the truth. It has become absolutely essential that every time an imbecile like Kangana Ranaut or Vikram Gokhale wants to spin a false narrative that Azadi was a bheek, we have to remember and retell the real stories of valour and heroism. The bheek narrative is accompanied by another falsehood that no one saved the freedom fighters who were sent to the gallows.

Vidarbha Gazette brings you this account from district Chandrapur of the revolutionaries of 1942 Quit India Movement who are remembered and revered till this date. Every year in the tehsil town of Chimur, it is not just 15th August the Independence Day which is celebrated, but 16th August as well – a day that lives in the memory of the district as Chimur Kranti Din. This story also reminds us of the efforts of organisations like Capital Punishment Relief Society, Nagpur which were set up precisely to provide support to freedom fighters who faced death sentences. 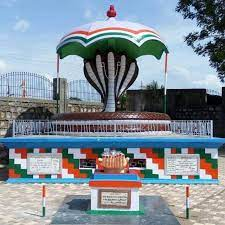 The memorial of Martyrs, Chimur

Chandrapur district was karmabhoomi of Rashtrasant Tukdoji Maharaj (1909-1968), a sant or spiritual leader whose bhajans carried the messages of spiritualism as also those of freedom, education and democracy. Maharaj had a great influence on the people of Vidarbha and he contributed vastly to raise the consciousness amongst Adivasis and rural people about the importance of freedom from British rule, about how it was their duty to participate in the national movement for swarajya. 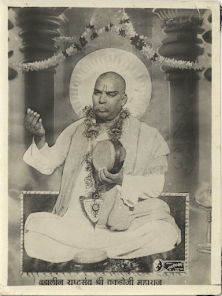 Rashtrasant Tukdoji Maharaj with Khanjari in his hand

On 8th August 1942 Mahatma Gandhi exhorted Indians to participate in the Quit India Satyagraha against colonial rule and thereafter the entire Congress leadership was either arrested or underground. Exactly a week later, on 15th August 1942 a 1000 kms from Mumbai, in a village called Chimur in Chandrapur district, Rashtrasant Tukdoji Maharaj inspired his followers through a khanjari bhajan whose lines went as under:

(Why have you created disturbance by inflicting such pain on India? Our God is about to come. The bushes and trees will be our weapons, and the devotees will march as an army. The stones shall become bombs and our boats will reach the shore.)

On 16th August 1942 the people of Chimur took out a rally to protest against the arrest of Congress leaders. The police opened fire against the peaceful demonstration and just like in Jallianwala Bagh the police fired till the very last bullet. Many were killed and many injured. In retaliation the angry public attacked the police. In the altercation the Sub-Divisional Magistrate, the Circle Inspector, the Naib Tehsildar and a Police Constable were killed. The villagers forced some police to remove their uniforms – a symbol of British rule – and don the Gandhi Topi instead – the cap which symbolized nationalism. The villagers even broke down a small bridge that connect Chimur to the district thereby cutting off the village.

On 19th August 1942 hundreds of British soldiers descended upon Chimur and barged into the homes of the villagers, unleashing terrible brutalities. They beat up boys and men, raped many women including the wife of the Sarpanch who was pregnant. The atrocities went on till 26th August when the soldiers were finally withdrawn. 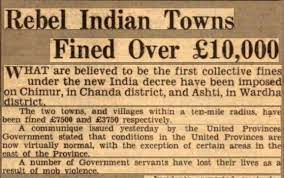 A collective fine of Rs.1 Lakh was imposed on Chimur, the first time ever that such a collective fine was ever imposed on Indian people. Rashtrasant Tkdoji Maharaj whose bhajan had led to the protests was arrested and imprisoned for several months in jails of Nagpur, Amravati and Raipur.

As the news became known outside, prominent women leaders from Nagpur made a door-to-door survey in Chimur and submitted their report of the brutalities committed by the army  to the Central Provinces government, but the colonial government discarded their report saying that the village women had made up stories of rape to malign the British army. Usha Mehta, a Gandhian leader broadcasted the news of Chimur agitation and the cruelties inflicted on the freedom fighters through an underground radio called ‘Secret Congress Radio’. This same news was later broadcast by Azad Hind Radio. Seeing the rising anger amongst the Indian people, the British government clamped down on the press by using the draconian provisions of the Defence of India Rules. The media was furious at this gag order and the Press Council of India registered a strong protest against it.

Gandhiji’s close disciple Professor J.P. Bhansali fasted for 63 days in Wardha as protest against the atrocities and the media gag. Thousands of people from all walks of life signed a petition demanding enquiry into the entire matter. Loknayak Bapuji Aney, Professor Bhansali and many stalwart leaders from different political parties visited Chimur and demanded investigation of the crimes committed by the army. As a result of these protests by stalwarts and common people as well as consistent follow-up by the media, a commission of enquiry was appointed which reported that many women had been raped, in some cases by more than one European. Women had been robbed of their jewellery and even minor girls had been molested. Although the crimes came to the fore no British soldier was punished for the crime and no reparations were made by the government to the victims.

On the other hand, hundreds of villagers who had been arrested were put on trial. A team of stellar lawyers from Vidarbha defended them ably but in spite of their best efforts 29 people were sentenced to death and 43 to life imprisonment and many others to various sentences of rigorous imprisonment. Through appeals and petitions the death sentences of 22 persons were commuted to life but the struggle continued to save the others as well. In Mumbai lakhs of workers associated with various unions responded to a call by Mahatma Gandhi and took out a protest rally demanding justice for the Chimur freedom fighters and commutation of their death sentence.

In Nagpur, a Capital Punishment Relief Society was formed to seek justice for the Chimur accused. Under the tireless leadership of its President Ms. Anusayabai Kale, the Deputy Speaker of Central Provinces Legislative Assembly, the organisation was able to represent the case of the revolutionaries and the death sentences were finally commuted to life sentences by the British Crown exactly three years from the incident, on 16th August 1945. 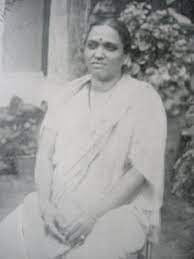 Anasuyabai Kale who fought against capital punishment of Chimur revolutionaries.

Photos are taken from internet

Gadchiroli An ancient tale reverberates Of epic battle, blood and gore A Dharmayuddha that...