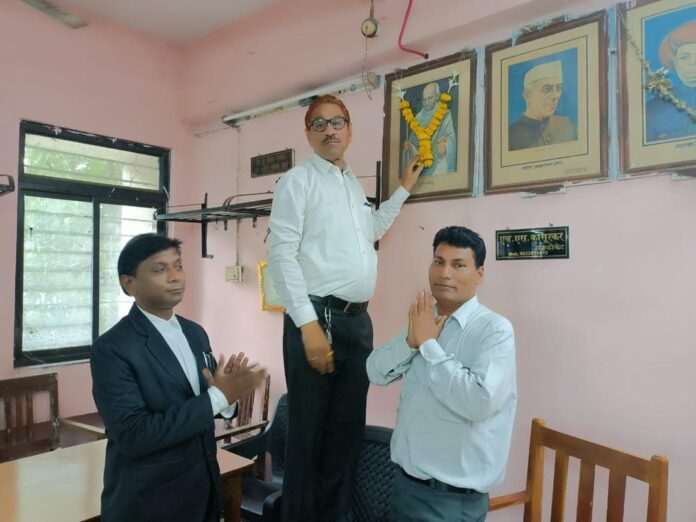 No Official Function on Gandhi Jayanti

It is shocking news that the Chairman and other elected office bearers of the Chandrapur District Bar Association (CDBA) simply ‘forgot’ to organise official function on 2nd October Gandhi Jayanti to pay respect to the memory of Mahatma Gandhi. Not only the Mahatma, they also disregarded the second Prime Minister Lal Bahadur Shastri who shares Mahatma Gandhi’s birth anniversary.

On 3rd October at about 5:00 p.m. when it became clear that the office bearers did not have time or inclination to organise a programme to remember the Mahatma, some of the lawyers present in court took it upon themselves to do so. Thus, later in the evening the portraits of Mahatma Gandhi and Lal Bahadur Shastri were garlanded and some lawyers paid their respect. These lawyers include Adv. Farhat Baig, Adv. Atul Bhambore, Adv. Girish Marliwar, Adv. Prakash Sapate, Adv. Prashant Sonule, Adv. Kapil Bhagat, Adv. Sunny Sharma, Adv. Kailash Mendhe, Adv. Karlekar and Adv. Naukarkar. As per reports, while garlanding the portrait of Lal Bahadur Shastri in the Bar Library, the Secretary of CDBA was present but showed little interest in participating. Some other senior lawyers were also reluctant to garland Mahatma Gandhi.

The negligent and apathetic attitude of the Office Bearers of the  Chandrapur District Bar Association has led to great discontent among many lawyers. There is a general feeling that the Bar Association has gone in the hands of people who are averse to the Gandhian philosophy of non-violence, communal harmony and constructive work which is why the Office Bearers purposefully decided not to  commemorate Gandhi and Lal Bahadu Shastri on their birth anniversary. It is also being pointed out that the same office bearers were extremely active in organising Rangoli competition and celebrating Diwali inside court premises but do not have the same enthusiasm for Gandhi Jayanti.

The politics behind such actions have riled many and the incident has become a matter of discussion amongst the legal fraternity some of whom aired their views in social media. Undoubtedly the Office Bearers of the CDBA have hurt the nationalistic sentiments of all those people who consider Mahatma Gandhi the tallest leader in India’s freedom struggle and Father of the Nation and respect Lal Bahadur Shastri as one of the Mahatma’s greatest followers.

It is indeed ironical that Mahatma Gandhi who was himself a lawyer was not remembered in an official function by the district bar. Lal Bahadur Shastri was not a lawyer, but he was a scholar of Kashi Vidyapeeth holding a first-class degree in philosophy and ethics. One may conclude that the office bearers of CDBA, ‘learned’ as they claim to be, are still somewhat deficient in those two subjects – Philosophy and Ethics. Otherwise they would have apologised for their failure by now.