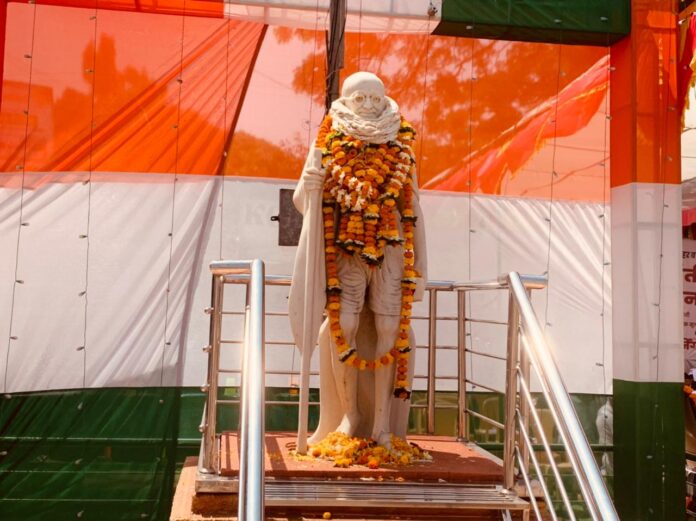 At Mul – a small block town of Chandrapur district –  Gandhi Jayanti dawned with people singing the Mahatma’s favourite bhajan Vaishnav Jan to Tene Kahiye led by the Ashok Yerme of Kala Niketan, a local cultural organisation. A couple of hours later there was  a Mook Shanti Andolan at the same spot to protest against a proposed railway siding for the use of Surjagad iron ore mines. Both the programmes took place right next to a marble statue of Mahatma Gandhi which brings the square its name – Gandhi Chowk. The plaques on the base of the statue tell us that it was donated by Namdev Somannaji Gogirwar and was unveiled by the Chief Minister Yashwantrao Chavan in 1961 in the presence of Marotrao Kannamwar who was the PWD minister. More interestingly it notes that Mahatma Gandhi had travelled twice in 1933 and 1936 on his way to Saoli, which at that time was a small village in Mul Taluka, 20 kms away from Mul town.

So what brought the Mahatma to Mul and Saoli? According to the website maintained by Sewagram Ashram, Wardha Mahatma Gandhi disbanded the Satyagraha Ashram at Sabarmati in July 1933. In November of that year he commenced on Harijan uplift tour. It was around this time, on 14 November 1933,  that he first crossed Mul, possibly as part of that yatra.

In September 1934 Gandhiji announced his retirement from active politics and his decision to engage in development of village industries, Harijan uplift and basic education. In October 1934 he inaugurated the All India Village Industries Association. In April 1936 he settled down in Wardha, making Sewagram Ashram his headquarters.

Mahatma Gandhi’s visit to Saoli via Mul in February 1936 was directly linked to his promotion of Khadi and village industries. On this trip he stayed for a week at the Khadi Centre at Saoli whose beautiful premises have a welcoming presence even today. The first piece of hand-woven Khadi cloth was produced in Sabarmati Ashram in 1917 – 18. In 1920 the Congress Working Committee finalised the Indian flag using Khadi. In 1922 Mahatma Gandhi requested the Indian National Congress to start a Khadi department and accordingly in 1923 Kakinada Congress Session the resolution was passed. In 1924 a semi- independent body All India Khadi Board was formed under the Chairmanship of Jamnalal Bajaj. On 23rd September 1925 Gandhiji founded the All India Charkha Sangh.

In Saoli, spinning and weaving became a household activity since 1926. According to Bandubhau Bhadke, the secretary of Nag Vidarbha Charkha Sangh, “Nearly every home of Saoli village was involved in spinning and weaving. My grandmother to worked the Charkha at home. Jamnalal Bajaj was aware of the commitment of Saoli people towards Khadi and it was he who brought Gandhiji to Saoli. Gandhiji came to Mul from Chandrapur on train and then walked from Mul to Saoli. At that time the people of Saoli welcomed him in a public function with a Maanpatra. Gandhiji stayed in Saoli for a week.”

When asked what Gandhiji did while at Saoli, Bandubhau says, “He did not come here alone. He was here with Jamnalal Bajaj, Sarojini Naidu, Rajendra Prasad, Sardar Vallabhbhai Patel, Vinoba Bhave and Vinoba’s father Balkoba Bhave who was a trained weaver. They discussed the freedom struggle at Saoli. Gandhiji taught the villagers cleanliness by cleaning the village. He held prayer meetings. Mahatma Gandhi’s adopted son Krishnadas Gandhi was married in the premises of the Khadi Centre at Saoli – under a mango tree. And only 25 paisa was spent in that wedding.”

After independence the Nag Vidarbha Charkha Sangh was registered in 1958 under the Khadi and Village Industries Commission Act, 1956. The founder chairman was Annasaheb Sahasrabuddhe. He was helped by  Jamnalal Bajaj, Baburao Sohoni, Keshavrao Jambhulkar, Vasantrao Apte,, K.C. Santoshwar and Shankarrao Vele. The organisation continues to work till this day. The organisation has branches in five districts – Chandrapur, Gadchiroli, Amravati, Nagpur and Yavatmal.

The centre at Mul produces Nimboli soap and there is some spinners who work the modified Ambar Charkha. Spinning continues at Saoli although weaving has stopped. Weaving is done in Nagpur where the organisation has the Khadi Gramodyog Bhandar inaugurated by Gandhiji in 1935.

A pamphlet issued by the Nag Vidarbha Charkha Sangh notes that the organisation has won many awards including a national award conferred by the Ministry of Small and Medium Industries in 2011 and best weaver award to Laxman Walke in 2007.

Tucked away in a small town like Mul, the Nag Vidarbha Charkha Sangh is almost forgotten by the government and the public. When I visited the campus at Mul on the eve of Gandhi Jayanti, I was sad to see a large portion of the tiled roof of a storage shed had collapsed. The organisation has handed over a portion of its campus to an educational institution called Pratibha Mahavidyalay run by Congress office bearer Vinod Dattatreya. The college and a soap making unit are the primary activities on these underutilized premises. However as Khadi and handmade products are finding markets around the world, we can hope that this organisation nurtured by the stalwarts of the freedom struggle will flourish.