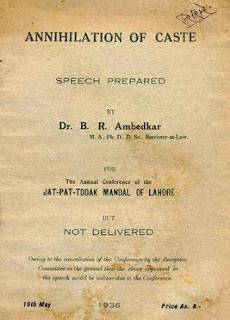 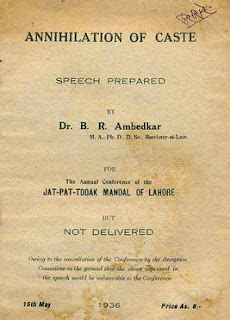 First Edition of Annihilation of Caste, 1936

Dr. B.R. Ambedkar’s Annihilation of Caste (AOC) is a seminal text published in 1936 which can be compared to the Communist Manifesto in terms of its philosophical importance. It is an anti-caste manifesto as much as the latter is an anti-class manifesto. It was written in the form of a speech which unfortunately was never delivered. Nevertheless, Ambedkar went ahead and published the book and used the opportunity to summarise his philosophy, declare his politics and present a programme to his followers.

For Dr. Ambedkar the problem of caste cannot be reduced to the mere eradication of untouchability or token reforms like the right to temple entry even while keeping the varna system intact. A sustained attack on Brahmanism is at the centre of his Manifesto. He does not stop at calling for the obliteration of caste but he goes further and calls for the destruction of the religion itself. According to him caste and untouchability are mere manifestations of religious dogma which shall thrive as long as the religion continues to exist.

Dr. Ambedkar is not opposed to religion per se. In fact he favours the continuance of religion as a system of morality. For him the disease of casteism afflicts Brahminism thereby destroying every vestige of morality within it. And he has no patience for a religion that is bereft of morality. Rather than calling for reforms Dr. Ambedkar discarded Brahminism as an imbecile force that he had no time for.

It is important to understand the methodology applied by Dr. Ambedkar in AOC. He meticulously dissects and engages with the various strands of arguments that are put up before him in defence of Hinduism. He enters into the detailed debunking of the myths and practices thereby exposing the philosophical defects of the religion. This can be understood from certain philosophical illustrations that he provides.

Dr. Ambedkar’s first illustration takes the help of logic to show how any reform is not possible in the Hindu religion. How to abolish caste? He provides the answer that the only way it can be done is through the destruction of the authority of the shastras and Vedas. And logically this can only be achieved if the religion itself is done away with. The second illustration is by way of providing the crucial difference between principles and rules and the observation that Brahminism is more a set of ritualistic rules demanding blind observation rather than a system of moral principles. The third, and perhaps the most damning one, is the observation that ‘a Hindu is not free to use his reasoning faculty’. Or ‘a Hindu cannot resort to rational thinking’ because he remains a Hindu only to the extent that he continues to follow the rules unquestioningly. The moment he questions – he ceases to be a Hindu.

Dr. Ambedkar deliberately avoids the trap of entering into a debate regarding a qualified acceptance of certain tenets of Hindusim. He observes that Hinduism’s spirit of compromise or what is better known as prayaschita makes the whole religion a cunning force rather than a moral one – the morality of your acts is never questioned as long as you perform the prayaschita for breaking this or that rule. Dr. Ambedkar claims that reason and morality the are two legs on the basis of which any religion can be reformed and since Hinduism lacks both it is beyond redemption.

This seminal text calls out for a close re-reading in the context of the paradox of Indian public life. On the one hand casteism remains entrenched – overtly and covertly – in many public institutions and therefore the constitutional protections provided to the Scheduled Castes, Schedules Tribes and the OBCs needs to be implemented in full letter and spirit. On the other hand every demand, such as that of a caste census, framed in the name of caste takes us away from the annihilation of caste through the destruction of Brahminism. This paradox is a complex one and a solution would probably emerge over an extremely long-term balancing of social and political powers.

Countering the  ‘Azadi was Bheek’ Propaganda Remembering the Revolutionaries of Chimur

Countering the  'Azadi was Bheek' Propaganda Remembering the Revolutionaries of Chimur The bestowing...