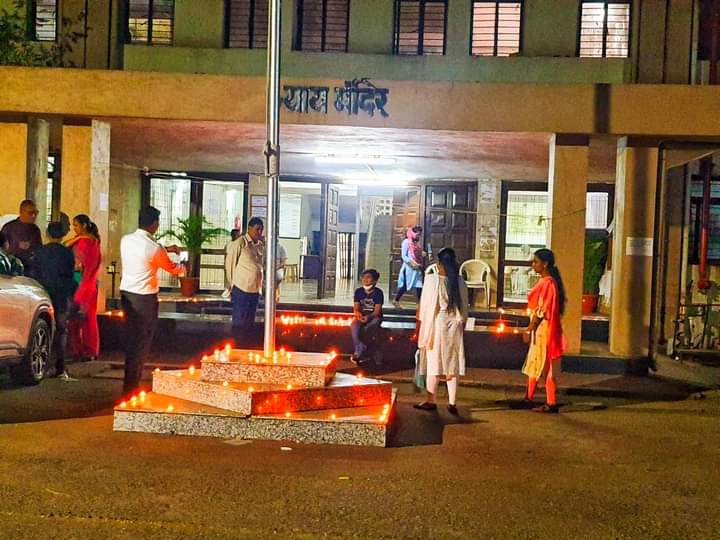 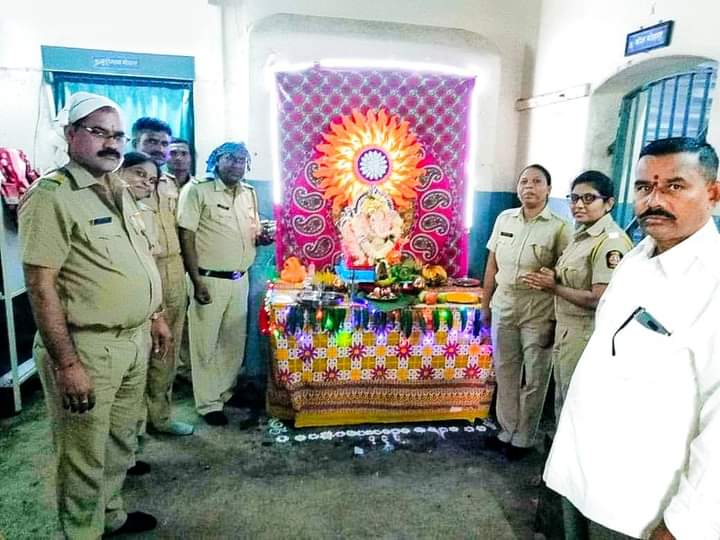 Lord Ganpati in a police station

The right wing strategy seems to be a simple one – encourage the celebration of Hindu festivals in state offices, install Hindu deities within the premises of state institutions and do Puja-Paath. Thus, this year we saw Lord Ganapati installed in police stations and public universities. We also saw hard-nosed IAS officers lead the Puja in government premises, seeking the blessings of the Panditji after reciting the mantras with full fervor.

Now the District Bar Association Chandrapur has taken the trend to new heights by celebrating Diwali in the premises of the District Court. The District Court has always been a rather gritty place of trials and bails and uptil now had limited itself to observing only two national festivals – the Independence Day and the Republic Day. But things changed when the newly elected Bar Association decided to make Diwali celebration their first order of business. A Whatsapp message was circulated by the Bar Association inviting members to participate in the ‘Azadi ki Amritmahotsav–cum-Diwali poorvasandhya’ festivities on 30th November. The event was kicked off by a Rangoli competition followed by felicitation of senior members of the Association and finally the lighting of 75 lamps.

In a skilful move the celebration of 75 years of independence was clubbed with Diwali. Freedom fighters from every caste, creed, region and religion had fought a grim and bloody battle to liberate India from British Rule, and applying Rangoli designs on the court’s floors on Diwali eve was a rather unorthodox way of commemorating the national struggle. A proper commemoration would have made sense if conducted in the presence of the entire legal fraternity and presided over officially by the Hon’ble Principal District Judge. Perhaps the District Bar Association needed that slight nod to Azadi in order to make their festive celebrations in the court premises palatable. One even suspects that the reference to Azadi was the condition on which the permissions were procured for such celebrations.

To my understanding, courts are solemn places of law and justice that need to maintain their constitutional neutrality towards all religions and belief systems. Celebrating Diwali on court premises is the first breach of the constitutional mandate and it is literally a physical breach. There is a take-over of the physical space of the institution and re-creating it, stamping it with new meanings through cultural gestures. The Rangolis will be swept away, the lamps will burn themselves out but the court premises of Chandrapur District Court will perhaps never be the same again – a place where all and sundry came looking for a way to litigate out of their troubles.

One also wonders if the avant garde programmes of the Chandrapur District Bar Association will be emulated elsewhere. What sort of precedent will be set? Will court premises all over Maharashtra became sites for celebration of Gudi Padwa, Midnight Masses on Christmas, Buddha Purnima Kheer distribution, Paryushan Parva, Lohri, Baisakhi, Holi, Durga Puja, Onam, Pongal, Pandum, Bail Pola, Makar Sankranti and Eid Milan? If nothing, every Hon’ble Principal Judge must ensure that all court premises are equally available for the expression of each and every religious festival.

A Constitutional amendment towards Hindu Rashtra would have been fought tooth and nail inside and outside the Parliament and the theories of the Basic Structure would have been debated ad nausesum in the Supreme Court. There would have been editorials in pesky foreign newspapers. But this piecemeal creation of the Hindu Rashtra, one small earthen diya or a small tika at a time, – this is convenient to the level of genius. It happens quietly without drum rolls, through warm-hearted messages, in an atmosphere of celebration and festivity, seeking the blessings of benevolent deities. If you express even the slightest doubt at such celebrations you may either be brutally trolled or ridiculed out of existence as a killjoy or be subjected to a bout of whataboutery (what about the iftar parties in governor house? etc).

Yes, it was the gentlest breeze of New India that blew away the last figments of secularism from those grimy government offices, police stations and court-cutcherries which represented State to the common person. Delhi is gearing up for yet another sarkari Lakshmi Puja on Diwali (which cost Rs.6 Crores last year) led by Chief Minister Arvind Kejriwal. The Ruling Party and the Opposition (self-declared janeudharis and Chandi-Path reciters et al) have worked hand in hand to effectively herald in the Hindu Rashtra – one bit at a time.

The Many Ideas of BharatvarsaQuestions that Remain Unanswered from...