This festive season brought two emotionally and ideologically charged films on Amazon Prime, both based on true events – Sardar Udham and Jai Bhim. In the first film Sardar Udham Singh waits twenty one years to assassinate Michael O’Dwyer, the erstwhile Lieutenant Governor of Punjab who had masterminded the Jallianwala Bagh Massacre in 1919. And in the second film, the human rights lawyer Chandru represents the Irula tribal woman Sengani in her search for her missing husband through a habeas corpus petition in Madras High Court.  The protagonists in both these films seethe with righteous anger as they seek justice on behalf of entire communities.

The violence in both the films is graphic. The Jallianwala Bagh Massacre is shown in the second half of Sardar Udham. Brigadier-General Dyer arrives with his soldiers and surrounds the peaceful gathering of protestors at Jallianwala Bagh, blocking every exit path. Over several minutes the soldiers open indiscriminate fire leaving hundreds dead and injured – women, men, children, old people. But what follows is even more heart-wrenching. Sardar Udham Singh walks across the dark screen, amidst the blood and gore, trying not step on bodies and clothes, searching to find the survivors. He lifts the barely alive child, begging him not to close his eyes and carries him to the nearest home for help. Then he returns and lifts another person on his shoulder taking them to the house before returning for others. As people die around him, he hastens to save them. At one point he returns with a trolley and lays injured people one on top of another and pushes them to the makeshift medical camp. As the sequence progresses with Sardar Udham Singh returning again and again in the tragic manner of Sisyphus, the enormity of the crime and loss hits home.

In Jai Bhim, it is not a Brigadier General but a Sub-Inspector Gurumurthy and his subordinates manning a non-descript police station on the borders of Tamil Nadu who heap unspeakable violence on innocent Irula Adivasis. Jai Bhim shows the working of a brutal police system in which false cases are foisted on Dalits and Adivasis as a matter of course. Rajakannu is falsely accused of stealing jewelry from the house of a local bigwig and he along with his pregnant wife, sister, brother and nephew are severely tortured in police lock-up. The scene in which Rajakannu’s sister is stripped naked in the lock-up is devastating to watch. Rajakannu dies of the third-degree torture in custody and the police concoct a story of escape from custody and death by accident. 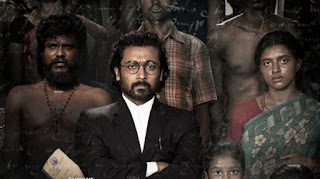 Chandru, played impressively by Suriya, is the dynamic, ideologically committed activist – lawyer who exposes the systematic brutalization of the tribals. Jai Bhim should be watched for the portrayal of fairly realistic lawyering and court room scenes. Chandru tape records his client’s statement, visits the important crime-related scenes, reads and re-reads documents and goes on a wild goose chase trying to find the tribals in Kerala. Not just Chandru, but the Government Pleader and specially the suave Advocate General whose Parliament seat hangs in balance are rather true to life.

However, the character who leaves an indelible impression is I.G. Perumalsamy essayed impeccably by Prakash Raj. I.G. Perumalsamy is appointed by the court to investigate into the disappearance of the three tribals – Rajakannu, Moosakutty and Irutappan. While Chandru is the monochromatic ‘angry young man’, Perumalsamy has unmistakable shades of grey – he will break a ruffian’s fingers to protect a schoolgirl and defend authoritarianism as necessary for democracy.

Just as the twenty-year old Sardar Udham Singh changes from a youthful revolutionary to a seething avenger through his experience in the Jallianwala Bagh, we see I.G Perumalsamy change before our eyes from a cynical IPS officer ensconced in privilege to someone who is able to act with great inner depth and conviction. In the first interaction which Chandru organizes between the I.G and the Irula community, Perumalsamy sits on the chair while the tribals sit on the floor in the posture of the defeated. Listening to their experiences, Perumalsamy is visibly disturbed by the litany of false cases and torture. He shifts and squirms till he can take it no longer. The Inspector General of Police who begins by sitting on a chair ends up sitting on a mattress beside Irula women who weep inconsolably. Not a word is spoken by the officer in any of these interactions, he only listens – it is his eyes, his expressions that communicate the repressed anger and shame at the horrors committed by his own department.

In the film, as in real life, it is Perumalsamy – the system insider – who provides invaluable assistance in uncovering the truth. Through him Chandru has direct access to officials and documents which may not have been available to him otherwise. The DGP wants the matter settled by offering monetary compensation to the tribals but Perumalsamy refuses to toe his boss’ line. And on the last day when the errant Inspector Gurumurthy roams the night trying to find the tribals, he is told that they had already been removed beyond his reach by IG Perumalsamy.

At the end of the film, we learn that the real Advocate Chandru went on to become a Judge and delivered judgments in more than 96,000 cases. I wish that the film-maker had also informed us about the real Inspector General Perumalsamy – did the police department and the government of the day reward him for his honest commitment to law and conscience? Or did they punish him by throwing him into some side posting?

Sardar Udham and Jai Bheem show the arc that post-independent India has travelled from its colonial past. The execution of Sardar Udham Singh was a foregone conclusion – the police, the courts and the media were all instruments of colonial repression. But Jai Bhim leaves us with a sense of vindication and justice – that in independent India, the Irulas can fight against the odds and win in the courts of law. Amidst the worst possible darkness there remain the flickers of hope in the shapes of Chandru, Perumalsamy, the young adult literacy teacher Maithra, the party activists who support the tribals and the court that gives a sympathetic hearing.

Seen back to back (like I did) Sardar Udham and Jai Bhim together deliver a grim message: we must do our best as a country to keep the flickers of hope alive, to keep the avenues of justice open and accessible to each and every citizen of the country. Failure to do so could unleash murder and mayhem, fueled by injustices and underpinned by a sense of righteous anger.

The key actors in both the films – Vicky Kaushal, Suriya, Lijomol Jose, Manikandan, Rajisha Vijayan – deserve the accolades they are getting. Those who played the antagonists especially Shaun Scott (Michael O’Dwyer), Rao Ramesh (Advocate General), Tamizh (the harassed corrupt SI Gurumurthy) deserve as much credit. 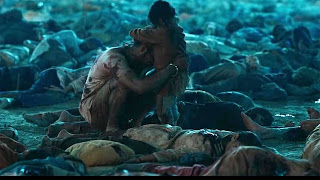 However, the standing ovation should be reserved for the children in both the films. Joshika Maya in Jai Bhim as little Alli accompanying her mother in the search for her missing father is absolutely unforgettable.

In the Wake of the Tragic Death of General Bipin Rawat