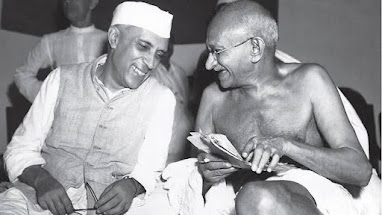 The right wing has developed a two-pronged strategy to deal with the ghosts of Nehru and Gandhi. The political arm of the right wing, represented primarily by the BJP, attacks Nehru because they have to battle the legacy of Nehru the Prime Minister, the builder of institutions, the diplomat, and the staunch upholder of secular governance. The BJP, which attacks Nehru, conveniently appropriates the symbolic value of Gandhi painting him as a Hindu leader, sidelining his opposition to religious and ethnic nationalism.

The cultural arm of the right wing, represented by a section of saffron-clad religious leaders of the Hindu Dharma, on the other hand, viciously attack Gandhi. As religious leaders used to being addressed as Sadhu, Sant, Maharaj etc, they have to grapple with the ghost of the person whom the entire nation calls the Mahatma. Gandhi is the greatest obstruction to the formation of the Hindu Rashtra and therefore the cultural arm of the right wing goes to every extent to present him as the villainous figure – the betrayer of desh and dharma. Together the political arm and the cultural arm of the Hindu right wing work in tandem to discredit Nehru and Gandhi, the two towering figures who together imagined a modern, progressive, secular nation built on human values of mutual respect and non-violence.

‘Islamic Bharat mein Sanatan Dharma ka Bhavishya’ – This was the topic of the Dharma Sansad at Haridwar organized by Yati Narasinghanand, priest of Dasna Devi Temple at Ghaziabad and chief of Juna Akhara. The Haridwar Dharma Sansad was held between 17th – 19th December. A few days later another Dharma Sansad was held at Raipur, Chhatisgarh, organised by Neelkantheshwar Sewa Trust under the patronage of Mahant Ram Sundar Das, ex-MLA of Congress party and Chairperson of Chhattisgarh Gau Sewa Ayog. This Dharma Sansad was attended by sarvadaliya netas – prominent leaders from all parties. Both the Dharma Sansad provided extreme right-wing elements to spew venom against Muslims and the Mahatma.

Prabodhanand Giri, a former RSS Pracharak who runs Hindu Rakshak Sena exhorted Hindus to start the mass killings of Muslims calling it a ‘safai abhiyan’ or ‘Cleanliness Campaign’. According to him Muslims should be hounded out of India and subjected to ethnic violence similar to what the Rohingyas are suffering in Myanmar. He ridiculed secularism saying, “Secular secular karna band karna chahiye.” – Stop saying ‘secular, secular.’

Sadhvi Annapurna who gained notoriety for shooting a pistol at a photograph of Mahatma Gandhi explained the theme of the Dharma Sansad saying, there are on-going preparations to make India into an Islamic country. She rued the fact that Hindus are not punishing Muslims and called upon Hindus to keep both shastra aur shaastra (weapons and holy books) with them. She made a personal commitment to kill Muslims: “Let people call me Godesewadi or Gandhivirodhi …whoever is against Hindu dharma or Sanatan Dharma, I will kill that person and save my Hindu Dharma. If I don’t have knife or sword then I will kill with my bare hands.” She said that a hundred Hindus should kill two lakh Muslims and be prepared to go to jail. Her message to the youth of the country was “….copy kitab ko rakh do aur haath mein shastra utha lo….keep aside your notebooks and books and pick up weapons in your hands.”

Swami Anandswaroop is known for his warnings against celebration of Christmas or the festival of any other religion in Haridwar. He said that the manthan in the Dharma Sansad will lead to amrit. The outcome of the deliberations of the Dharma Sansad, according to him, should be treated as Dharma Adesh – Religious Command. And this Dharma Adesh should be followed by the elected governments at the state and central levels, otherwise “1857 mein jo yudhh hua, us se bhi bhyanak yudhh lada jayega” – a war more dreadful than the war of 1857 will be fought (against the elected governments.)

Yati Narsinghanand disagreed with the sword as the weapon of choice. “…they will not be killed by talwars…you have to go outrace them (the Muslims) in technique … they are an economy of forty crore people; you are a hundred crores but you don’t have children. They have the economic power. … since I was nine years old, I am hearing the hollow talk about economic boycott (against Muslims) …just forget about swords … you need better weapons than the enemy to win the war …. Jyada se jyada bache aur ache se acha hatiyar yahi tumhe bachane wale hai You will only be saved by having more children and better weapons.” Then he gave the slogan shastramev jayate: weapons will prevail!

In the Raipur Dharma Sansad Kalicharan Maharaj from Akola openly railed against Muslims and Mahatma Gandhi and expressing gratitude towards Nathuram Godse for removing the phoda funsi – warts and boils – which would otherwise become cancerous. According to him, Musalmano ka target rajneeti ke dwara rashtra kabjana hai. They have already succeeded in encroaching on Pakistan and Bangladesh before ‘our very eyes’. He exhorted that Hindus too should use politics to elect a kattar Hindu Neta in 2029. Kalicharan Maharaj held “mahaharami” Mahatma Gandhi responsible for the partition of India and thanked “Nathuram Godseji” for killing the “harami”.

Hating the Muslims and the Mahatma

The hatred for the Mahatma stems from the right wing’s hatred for Muslims. Muslims are presented as outsiders, encroachers, murderers, rapists and the enemy of the Hindu Dharma. Mahatma Gandhi is presented as that of a gaddar a traitor who betrayed his own religion by constantly capitulating to the unfair demands of the Muslims. It irks them that Mahatma Gandhi – who was a practicing religion and who had a massive following in the independence struggle did not openly ‘side’ with the Hindus in the ‘fight’ against Muslims. They see Gandhi’s politics of negotiation and tolerance as a weak-kneed cowardly response to the violent politics of the Muslim leaders.

In his speeches and interviews elsewhere Yati Narsinghanand traces two paramparas or traditions amongst Hindus. The first Parampara is of Maharana Pratap who fought against the Muslim invaders and suffered great personal hardships while doing so. And the second Parampara is of Man Singh who offered the women of his family to the Mughals, touched their feet and entered into relationship with them. Mahatma Gandhi, according to Yati Narsinghanand, belongs to the tradition of Man Singh while Nathuram Godse belongs to the tradition of Maharana Pratap. The hatred towards Gandhiji is thus not a personal hatred, according to him, but hatred towards the “icon” of Man Singh Parampara.

Interestingly, Yati Narsinghanand is a supporter of the British (“they never destroyed a temple” and “they tried to save the Hindus from the Muslims”) and also of the partition. The British, according to him, partitioned the country to protect the Hindus from Islamikaran. If the country would not have been partitioned the Hindus would have been over-run by the Muslims whose population would have exceeded 250 crores. He predicts that the rate at which the Muslim population is increasing in India, they will take over the politics of the country by 2029. According to him, Congress always wanted the Islamikaran of India and now the RSS – BJP was going the same way. They too were doing nothing to prevent the Islamicization of the country.

Are FIR and Arrests Enough?

The hate speeches in the two Dharma Sansads led to demands for registration of offence and arrests. FIR was registered by Congress leaders in Raipur and eventually Kalicharan Maharaj was arrested. In the case of Haridwar, the law is moving slowly and although FIRs have been registered, all the hate – speakers have not been arrested.

However, the question arises whether registration of FIRs and arrests are enough in such hate speeches which call for genocide, waging war against elected government and using the worst kind of abuses against the Father of the Nation. The BJP regime with its overt Hindutvavadi agenda has provided the safe space for such hatemongers to spread their message of hate. This is why, in Uttarakhand, where the BJP is in power, the police officer who is expected to take action, is instead seen sharing a joke about impartial action with the organisers of the Haridwar Dharma Sansad.

The larger question is how to reclaim the liberal and inclusive public space. After independence India opted for secularism – a disassociation between state and religion. However, this disassociation was never complete. For some like Nehru, religion should never be allowed to come even close to state affairs, and the minorities should be defended against crass majoritarianism. However, for others like Sardar Patel and Rajendra Prasad state could never be totally cut off from religion which was a fact of community life – rather efforts should be put into fostering mutual respect and communal harmony.

For the right-wing Mahatma Gandhi is far more dangerous than Nehru because unlike Nehru, he was a not a dry secularist. He practiced the Hindu religion and through the use of religious symbols, practices and idioms he connected with the common masses. In spite of being a Hindu, Gandhi had a genuine love and friendship for people of every religion. He drew from the prayers of different religions and his ability to bring people from every section of society into the freedom struggle was unmatched. It is this very complex worldview and all-encompassing politics that angers the right wing.

Unfortunately, the Congress Party today has lost its way. The core question before the Congress is how to synthesise the model of secular governance advocated by Nehru and yet make space for the empowering and dignifying aspects of faith and religion in politics associated with Gandhi. This conundrum becomes even more difficult in the face of an upsurge of religious nationalism expressed through the electoral support for a Hindu party such as the BJP. The burden of providing such a synthesis does not only lie with the Congress party but with the liberal intelligentsia. While the liberal intelligentsia has to provide the synthesis, the Congress party is faced with the formidable challenge of providing the exemplar who will live that synthesis in public view. The last such exemplars were the Mahatma followed by Jai Prakash Narayan.