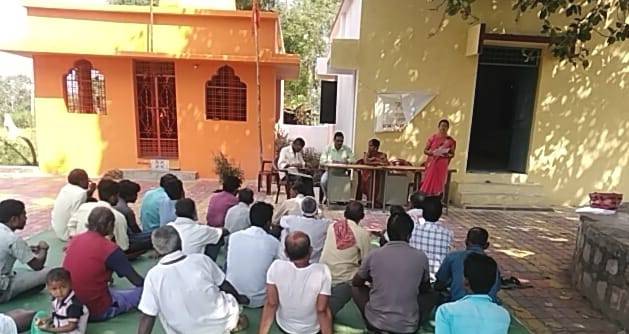 How much did the Gram Panchayats in Chandrapur district earn last year from the auction of sand ghats located in their jurisdictions?

The answer is zero.

Inspite of the Maharashtra’s new sand extraction policy formulated in September 2019 the state government has not paid a single penny as the legitimate share in sand auction earnings to the Gram Panchayats of the district.

This matter came to the fore because the Gram Sabha of Chitegaon, Taluka Mul has refused to issue fresh No Objection Certificate regarding further extraction and transportation of sand in 2021-22. The village is located on the banks of the river Mul and last year a total of 4240 brass sand was made available for extraction from the ghat in its jurisdiction. The ghat was auctioned at Rs.9189600. After deducting the royalty of Rs.1696000, 25% of the remaining amount was to be handed over to the Gram Panchayat under the new policy. This came to Rs.2297400. This is the amount which the Gram Panchayat is determined to access.

Through a letter dated 19th November 2021 the Gram Panchayat informed the Tehsildar, Mul that the NOC would be made available only after the administration either deposited the due amount or explained the delay. Interestingly, the letter states that the Gram Panchayat which was formed in 1953 has not received any mining royalties since its inception even though the sand has been extracted from the village ghats several times.

Adv. Kalyan Kumar, Member Gram Panchayat Chitegaon called upon the state government to deposit the due amounts without further delay:

On the one hand the government wants Gram Panchayat to take the responsibility of village development and on the other hand they are not paying the legitimate amounts due to us. The government owes more than Rs.22 lakhs in last years dues to Chitegaon Gram Panchayat. If that money is received, it will be used for the common welfare of villagers.

The Additional Collector Chandrapur Vidyut Warkhedkar has recently written to the Additional Chief Secretary, (Revenue and Forest) seeking permission to transfer the pending amounts to the various Gram Pachayats including Chitegaon. Vidarbha Gazette has a copy of the letter which shows that the state government owes a total of more than Rs. 2 Crores to 20 Gram Panchayats of the district. Some of the Gram Panchayats who are yet to receive their dues include Bhejgaon (Rs. 2698860), Rajoli (Rs.2763889) and Ajaypur Gondsawari (Rs. 2156667). Out of the total 20 villages, ten villages are from Mul taluka alone.

According to a senior official of the district, the glitch has arisen because the amounts procured from sand ghat auctions is deposited directly to State Consolidated Fund. Although the policy on paper states that 25% of the auction amount after deduction of royalties is to be released to the Gram Panchayat, practically speaking it is nearly impossible to get amounts sanctioned and released from the state treasury.

The district administration is in a hurry to find a way out of the quandary because the Chandrapur district has procured environmental clearances for 20 sand ghats which are due to be auctioned in early October. As a last minute effort the SDO Mul, Mr. Khedikar has directed a Gram Sabha to be called in Chitegaon where he will personally remain present to persuade the villagers. However, the villagers are preparing to take up the case to higher level and are not ready to let go their legitimate claims.