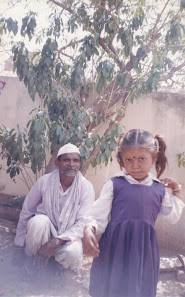 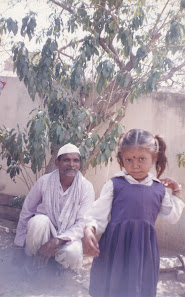 The man in the photograph is Vishwanath Vithoba Shende of village Tekadi, taluka Mul, district Chandrapur. The meaning of Vishwanath is ‘Lord of the World’ but this Vishwanath was a bonded labourer. He was around 40 – 45 years old in 2001, landless and working as a labourer in the farm of a village landlord. Vishwanath Shende belongs to the Dhivar community which is one of the poorest and most marginalized communities in Vidarbha. He had taken some advance money from the landlord and ended up working for him on very little weekly payment. The landlord he worked for made Vishwanath toil in the fields, look after the cattle and do sundry chores around the house. For several months he did not pay Vishwanath the weekly payments and threatened not to pay him all if he left the work altogether. So Vishwanath had no choice but to keep working in the fields and ask for the settlement of accounts.

Vishwanath’s younger brother Maruti came in contact with Shramik Elgar through the campaign for forest rights. He told us of the problems his elder brother was facing. After listening to his story we felt that it fell squarely into the definition of ‘bonded labour’ as described in the Bonded Labour (Abolition) act. According to our understanding at that time, a person who was forced to work for less than minimum wages or on nominal wages to pay off a debt was a bonded labourer.

We helped Vishwanath Shende make an application to the Tehsildar, Mul.The Tehsildar immediately rejected the application saying that there are no bonded labourers in Maharashtra.

“But he is not being paid for the last several months and the employer is not allowing him to leave the work either,” I tried to argue in vain.

“Does that mean he is a bonded labour? Do you think this is Bihar? Listen Madam, Maharashtra is a progressive state, we don’t have bonded labourers.” the Tehsildar said, and sent us home.

Then we applied to the District Collector who was even more furious than the Tehsildar.

“But if a man is working to pay off a debt, if he is not being paid over several months and the employer is not allowing him to leave and work somewhere else, what should we call him?”

The District Collector not only asked us to leave but later sent a letter saying that the District Bonded Labour Committee had deliberated on the issue and had decided that this was not a case of bonded labour. It was specifically mentioned that there were no bonded labourers in Chandrapur.

Shramik Elgar filed a petition on behalf of Vishwanath Shende before the State Human Rights Commission which had been newly established and we felt that the Commission would take serious cognizance of the matter. There was however, only one hearing before Justice Arvind Sawant who issued notices to the district administration and the matter was delayed because of management problems that the SHRC was facing in its initial days.

Local media reported the fact that the SHRC had issued notices on a bonded labour issue and, unfortunately this was taken as an affront not only by the administration but also by the Guardian Minister, Ms. Shobha Phadnavis. We were seen as trouble makers who were bringing a bad name to Chandrapur.

The district collector started an enquiry against us and also wrote the charity commissioner’s office to initiate a separate enquiry.  We ended up attending dates at both these offices. However none of these enquiries progressed – it was as if the very aim was to keep the cases pending against us.

Then one day we got a letter from the Home Ministry (FCRA Division), New Delhi that they wanted to conduct an enquiry based on complaints received by them. We were not given a copy of the complaint so we never learned exactly what the nature of the complaint or who the complainant was. Two officers from the FCRA division visited our office, looked at our accounts and asked some questions.

While all this was going on, quite unexpectedly a prominent Marathi newspaper started a series against Shramik Elgar. They wrote three articles in a row apparently based on information from District Collector’s office. The articles were aimed at painting me as a violent Naxalite who should be immediately put behind bars.

A couple of days later one of our funders called to inform us that they had received a letter from the District Collector by which they had ordered them not to support our work because we were indulging in ‘anti – national’ activities. Thus, the attempt to help one man Vishwanath Shende had ended up being described as an anti-national activity.

At this point we filed a writ petition in Mumbai High Court, Nagpur Bench against the District Collector. We were represented by Adv.Ashutosh Dharmadhikari. Fortunately we got a sympathetic hearing from the court and in the course of the matter the Hon’ble Court called for the report of the Home Ministry. The report from the Home Ministry was in our favour which  strengthened our case.

In his reply on affidavit the District Collector made a special pleading that he had initiated the enquiries  against us as well as written to funders at the directions of the Guardian Minister. He personally remained present before the High Court and apologised for the harassment.

While the order of the Hon’ble High Court gave us respite against the flood of enquiries against the organisation, this still did not solve the problem of Vishwanath Shende till a couple of months later the SHRC passed a detailed order finding Vishwanath Shende to be a bonded labourer under the Bonded Labour Abolition Act. Further, the Commission recommended that the district collector should initiate the process of rehabilitation. 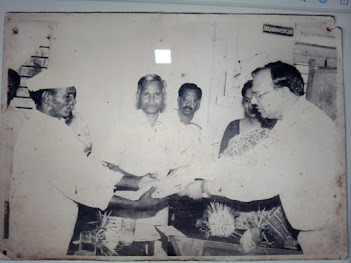 The process of release and rehabilitation meant that offence was registered against the landlord and he was arrested. Vishwanath Shende was given a certificate of release by the district collector and also the government’s rehabilitation package which included a house and economic assistance.

This story of Vishwanath Shende is of twenty years ago but things have not changed much for rural labourers. Thousands of labourers work after taking advance payments from employers or contractors, they are paid less than statutory minimum wages and often are not allowed freedom of movement. And even now administrators across India swear, “There are no bonded labourers here.”