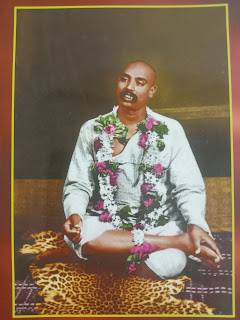 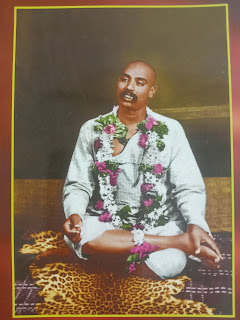 In 2000 I was still new to Chandrapur district and learning new things every day. Since villagers would be free in the evenings, the meetings of Shramik Elgar would start late and end at dinner time. Once there was a big meeting in Chitki, and villagers from nearby villages had come there too. After dinner I found that the villagers had gathered around a fire and were beginning to play on a harmonium and dholki. Soon they started singing bhajans. One person would sing a couple of lines and others would join in, clapping their hands in rhythm. First there were a few bhajans in Marathi and then I was surprised to hear a bhajan in Hindi:

Till that day, I had associated bhajans with the praise of gods and saints, but this bhajan was something totally different. This was a bhajan which said that our means of attaining spirituality should change. Prayers and rosaries, yagyas and going for pilgrimages could no longer ensure spiritual progress. Those methods were all outdated. The new path is to redistribute land to the poor – this is the new song of spiritualism which people should sing in every house. Tukdyadas, the author of the bhajan, then issues a warning – those who oppose land redistribution to the poor can only be declared lunatics!

I was deeply touched with the bhajan that advocated land reforms and was curious to know more about the poet. I was told that he was a saint, Rashtrasant Tukdoji Maharaj, who had spent many years of his life in Chandrapur district and inspired the people through his bhajans and keertans. 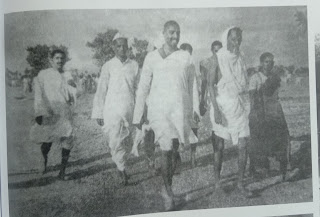 Born in 1909 in a small village called Yawali in Amrawati district, Maharaj came from a poor family and barely completed his primary education. From a very young age he was drawn to the life of renunciation. He meditated in Amravati, in Gondola in Chandrapur district and in the forests of Tadoba. He used the cultural resources like Saptah (weekly religious celebrations) and Chaturmasya (religious observations over four months) to bring people together. His way of communicating with the masses was through speeches and even more effectively through his bhajans which he sang to the beat of the khanjari.

In 1954 Rashtrasant Tukdoji Maharaj finished his magnum opus – Gram Geeta – written entirely in verse, in a simple Marathi language to provide spiritual and practical guidance to rural people. Gram Geeta covers diverse topics dealing with social duties, community organizing, ideal villages, importance of education and overall leading an ideal human life. Tukdoji Maharaj dedicated the book to farmers and it is here, more than anywhere else, that we find his deep sympathy for the rural farming community.

You are the provider of the entire village. You satisfy people’s needs by providing food, clothes and utensils. You give happiness even while you yourself continue to suffer great sorrows, this is your true greatness, O deity of the village.

You labour to build mansions for others, while you remain without even a small hut for shelter. You threw yourself into the struggle so that the country could be free, but others are enjoying the fruits of independence.

Through this effort, let your labour receive honour and let all eyes turn towards you. Let the flame of humanity glow with brilliance.

Thus, I dedicate this composition to you. You are the very foundation of the universe.It is my desire that you should seek upliftment in this world. 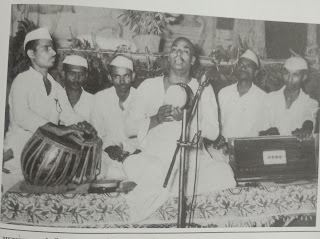 The Gram Geeta was ahead of its times as it tries to promote a rational mindset, education for all children especially girls, the importance of voluntary labour or shramadaan and developing a self-sufficient village economy. The Gram Geeta is still read in the villages of Chandrapur and other districts of Vidarbha. The Sri Gurudev Sewa Mandal formed by Tukdoji Maharaj continues to work for the promotion of the values and programmes given the Gram Geeta.

I learned about Tukdoji Maharaj from his writings and books, but more from the villagers for whom he is a living presence till this date. There are many homes across villages in the district where people proudly told me – “Maharaj used to come to our home. Whenever he came, he would eat the bhakri made by our grandmother.” I found that the words of Tukdoji Maharaj strike an immediate chord with village communities. For example, even today people immediately respond to the call for organising when they hear the following words of Maharaj:

“Bring together all those people who like to serve, who strive for the truth and make a strong active village organisation. Blades of grass forms the rope which ties down the elephant, an army of ants defeats a snake, wild dogs attacking together can tear apart lions and tigers.” 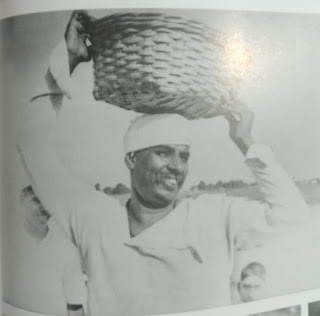 “Village self-rule is the true Ram-rajya. Self-sufficiency is the true swaraj. This is how the reverend Mahatma described the beauty of village development.”

Tukdoji Maharaj was one of the first ones to respond to the call for Quit India movement in 1942. He organized villagers in Chimur through his famous bhajan against British rule.

“Every tree and shrub shall act as weapon, devotees will make an army, stones will be like bombs and our boat shall find its harbour.”

His words led to a strong revolt against colonial rule in Chimur as well as Ashti and Tukodiji Maharaj was imprisoned for several months in various jails of Central India.

On the day Mahatma Gandhi was murdered, Tukdoji Maharaj, who was in the Ashram at Mojari (Amravati). He wanted to leave immediately for Delhi, but people stopped him because of the growing tensions across the country. He addressed a condolence meeting at Nagpur and later in many other places. The tank at Nagpur which was called as Lendhi Talao was rejuvenated by Tukdoji Maharaj who himself did shramadaan and cleaned the talao alongside his devotees. He later renamed the tank as Gandhi Talao.

There are some self-proclaimed Sadhus and Maharajas today who are spreading hatred against Gandhi without ever having met him. The Rashtrasant who actually met Gandhi and stayed with him in Sewagram Ashram over extended periods of time, wrote 112 bhajans in praise of Gandhi and his ideals and even published a book called ‘Gandhi Geetanjali’. 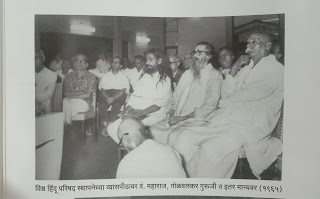 Maharaj at the formation of Vishwa Hindu Parishad

Rashtrasant Tukdoji Maharaj was closely associated with the Hindu religious organisations such as Vedant Parishad, Vishwa Hindu Parishad and Bharat Sadhusamaj Sanghatan, but he preached humanity, service and spirituality rather than any hard, fundamentalist version of religion.

“Those who have no humaneness in their hearts are going around seeking God. Such people will never find God, because God is not a vegetable you can find in the market.”

Above the gates of his Ashram is written in bold letters: sab ke liye khula hai, mandir ye hamara / ao koi bhi panthi, ao koi bhi dharmi. “Our temple is open for all / Come from any cult, come from any religion.” 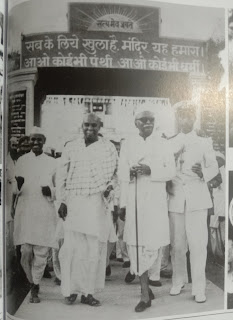 The Gram Geeta has an entire chapter on how to identify false Sadhu-Sants in which the Rashtrasant provides guidance to the devotee to look out for the following signs of a true Sant. Those who do not have the following markers are false Sants:

“The Sant is purer than the Ganga, cooler than the moon, untainted like the sun. The Sant is more generous than the Kalpataru in giving spiritual guidance. The Sant’s heart is tender and full of loving kindness. They seek to bring welfare to the whole humankind. The Sant follows only one dharma which is to strive for the welfare of all people, everywhere and at all times. The Sant does not have any caste or sub-caste. The world is their family. They hold all people who meet them as dear as close relatives.”

Going by the definition above we can be sure that if Rashtrasant Tukdoji Maharaj would have been alive today, he would have demolished the false Dharma Sansads in one stroke and thoroughly exposed the false Sadhu – Sants who are not only abusing Gandhi but who are calling for genocide and violence in the country.

Applauding Indian Women in Olympics – And a Message for Maharashtra

The women who represented India in the Tokyo Olympics did...

Every few days someone asks me, “How come you...