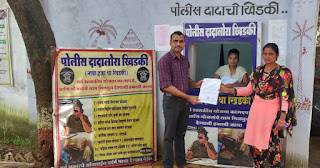 The ‘Non-Policing’ efforts by Gadchiroli Police 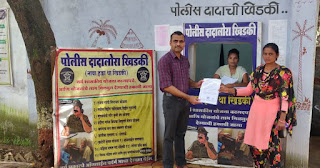 The Police Dada’s Window: One stop to Accessing Government Schemes

Taking government-run schemes to the doorsteps of the people has far more urgency in Gadchiroli than in any other district of Maharashtra. In this district which is scarred by Maoist violence, the state has consistently tried to win over the local people living in far-flung corners by going the extra mile to provide benefits under various schemes and programmes. Since the presence of other state departments in Gadchiroli is comparatively thin, most of these efforts have been led by the police. Also, the stakes are much higher for the police who are constantly on the Maoist target and support from local population becomes literally a matter of life and death. In 2013 Gadchiroli police formed the Civic Action Group (CAG) for implementation of government schemes and other welfare programmes which has expanded its work over the years. 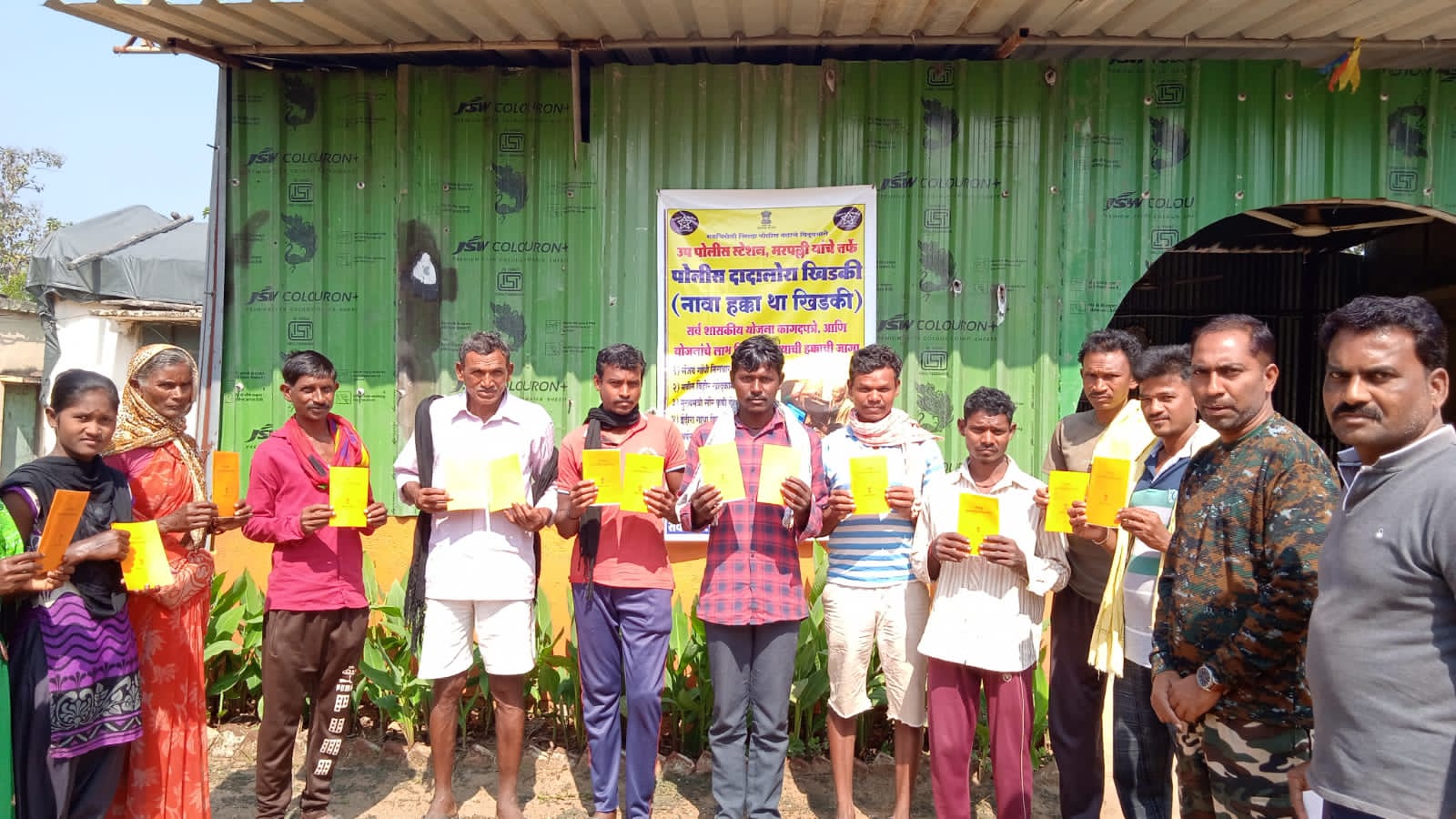 Ration Cards after Seventy Years of Independence, thanks to Police Dadalora Khidki

The Police Dadalora Khidki (Police Dada’s Window) is a recent initiative by the CAG which has evinced good response from rural and tribal people. In forty police stations and outposts in the district there is literally a window which the people can go to in order to access a plethora of government schemes and services. The police maintain a ‘score card’ of the number of beneficiaries and the score card for the year 2021 is impressive. It shows that more than 1 lakh people benefitted through the Police Dadalora Khidki – more than 5000 people got caste certificates, more than 62000 got Aadhar cards, Pan cards, driving licenses, Ayushman Bharat Card, Job card under MGNREGA and QR Code card made and more than 1000 youths were given training for police recruitment. 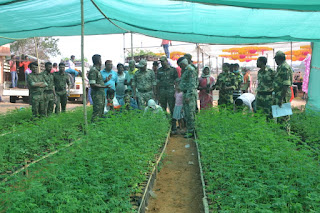 Saplings grown in the Police Station for distribution to farmers

Apart from government schemes, the CAG has also made an effort to provide services like conducting eye camps and distribution of thousands of saplings to farmers – drum sticks, custard apples and papayas – all of which were first produced at the police stations.

The police are not the authority to provide the benefits under different schemes and therefore the Civic Action Group has to work in tandem with other government departments. The S.P of Gadchiroli explains the co-ordination with the example of the work done for differently abled people. “Disabled people are entitled to the unique disability identity card, a 75% concession for travel on state transport buses and Rs.1200 pension under the Sanjay Gandhi Niradhar Yojana, but in Gadchiroli people do not know about these entitlements or how to get these. So, we identify the potential beneficiaries, some of whom approach the Police Dadalora Khidki. Then we organize a camp where the civil surgeon, the team from the state transport department and the Zilla Parishad Samaj Kalyan Vibhag are all present. The extent of disability is assessed by the civil surgeon and his team of doctors, the ST department processes the travel concession and the Zilla Parishad processes the application for pension.” 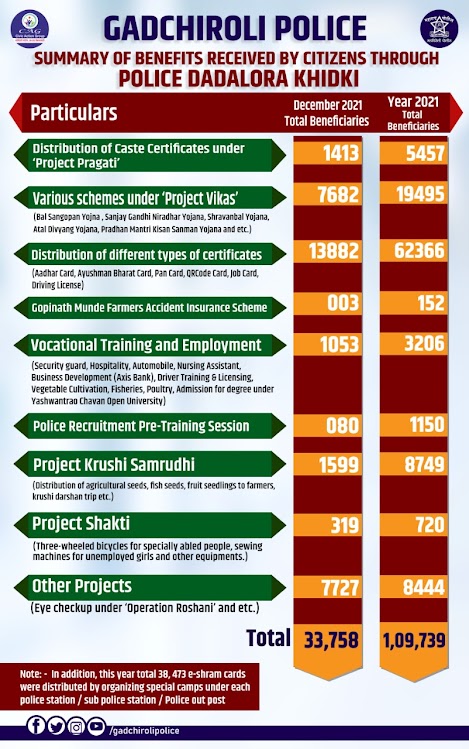 The Score Card of Civic Action

The S.P. has instituted awards for the police officers who perform well on the civic action front. There is a monthly award for the best Community Development Officer and an annual award as well. In 2021 the Community Development Officer Award went to Inspector Nalegaonkar and his team. Inspector Nalegaonkar was the officer-in charge of Laheri police outpost which supported tribal women who made brooms and other small items by linking them to markets within the district and also Nagpur.

Gadchiroli police has also been in recent news for the innovative comic strip called ‘Gadchiroli Files’. A brain-child of the S.P. who explains that “the comic strip is aimed at taking the ‘reality’ of Naxalism to people in the district and also those who are outside.” In the first strip a Maoist asks a school kid to join the ‘Naxalvadi Sangathan’ but the kid refuses saying he wants to go to school and become an engineer. Next we see the school building set afire by the rebel who gleefully says ‘Lal Salaam’ to the hapless kid.

The first comic strip was published on 2nd January 2022 and another one followed. The S.P and the three Additional S.Ps of the district brainstorm every fortnight on the ‘stories’ which are then drawn by an artist. “We are working on several strips, all of which are at different stages – some at the story level, others are being drawn. We have enough material to make many comic strips. ‘Gadchiroli Files’ will be a very regular thing over a period of time,” says Goyal.

The battle of ideas and ideology is an essential part of the overall response to Maoist challenge and the state’s ‘propaganda cell’ regularly distributes materials in Gondi language against the Maoists. However, ‘Gadchiroli File’s has an immediate appeal for people of all age groups which no other banner or poster can ever have. Instead of talking down at people or playing on the fear factor, it tells a story which can instantly resonate with a reader. Instead of telling people what to do, it poses a question that people need to answer. While it is too early to say, there is no doubt that if the comic strip continues and if it is done sensitively then ‘Gadchiroli Files’ has the potential of bringing long-term deep changes in the way people perceive Maoist politics.

On 13th November 2021, twenty-six Maoists were gunned down by Gadchiroli police in a ten-hour long encounter. In the last year, more than 50 rebels have been killed. The S.P Gadchiroli considers it an important achievement that the top Maoist leadership in north Gadchiroli is totally decimated and the Maoists are on a backfoot in the district. However, from a larger perspective, encounters or extrajudicial killings can only be accepted as aberrations in a democracy. It is for efforts like ‘Police Dadalora Khidki’ and ‘Gadchiroli Files’ that the Gadchiroli police must be congratulated.

Detective Byomkesh Bakshy! – Intricate Plot but No Dazzling Deductions The...