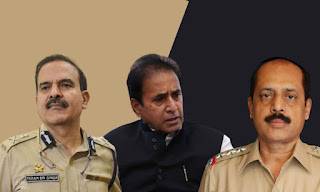 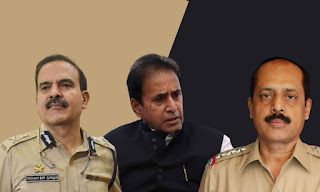 The Antilla Bomb Scare Case has all the twists and turns of a first class Bollywood potboiler. Some gelatin sticks are found outside the house of the richest industrialist of the country and then a man turns up dead. Sachin Waze, the police officer in-charge of the investigation of the explosives ends up as the prime suspect of the murder and also of placing the explosives outside Antilla in the first place. The hulla-gulla that follows ends up as a public spat between the then Mumbai Police Commissioner Param Bir Singh and the Home Minister Anil Deshmukh.  Param Bir dashes off a letter to Maharashtra Sarkar against Anil Deshmukh accusing the minister of ordering Sachin Waze and other policemen to collect a whopping Rs.100 Crores per month from city’s bar owners. Deshmukh not only loses his cabinet position but ends up in jail!

The Government of Maharashtra institutes a commission of enquiry headed by a retired High Court judge to look into the allegations against Anil Deshmukh. Meanwhile Param Bir absconds lock, stock and barrel after being accused of extortion (the sum is also in Crores) and is as invisible as Mr. India. When the Court calls upon Param Bir to provide evidence against Anil Deshmukh, this ex-top cop fails to comply. He is fined by the court not once but thrice for non-appearance and bailable warrants are issued against him. What a shame!

Today Param Bir’s advocate informed the Court that there is really no point in his client taking the witness stand because the complaint against Anil Deshmukh was anyway based on hearsay. In other words, Police Commissioner Sa’ab was merely repeating what Sachin Waze and other policemen had reported to him – his complaint was nothing but a repetition of kahi suni baatein.

Now, as very ordinary and ignorant citizens we can crack our brains over some very useless questions. For instance, was Param Bir Singh, who must have been taught the Indian Evidence Act as part of his police training, ignorant of the implications of hearsay? As a senior police officer did he not have access to some sound legal advice: somebody to tell him – sirji ruk jaiyye, hearsay par itna bada kadam mat uthhaiye! Moreover, since it seems that he goofed up why doesn’t he muster up some shred of courage to appear before the court and just say whatever he has to say! If nothing he should just apologize and eat some humble pie. Param Bir is turning out to be a param coward indeed.

The antics of the man have not only sent a minister to jail, it has left Sachin Waze squirming in his boots as well. Already in garam soup over the Antilla Bomb Scare Case, a most reluctant Waze was made to testify before the Enquiry Commission today. The Court dismissed his pleas that Param Bir should either depose in person or file an affidavit and poor Waze had no option but to face some cross-examination. One can understand Waze’s frustration – bhai complaint was lodged by Param Bir who is missing in action and here he is left answering questions instead. Now what if tomorrow Param Bir files a contrary affidavit? Sab golmaal ho jayega!

For your convenience, here’s the link