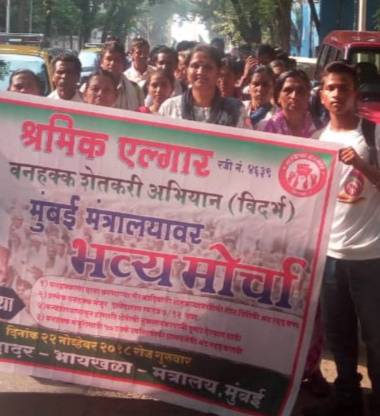 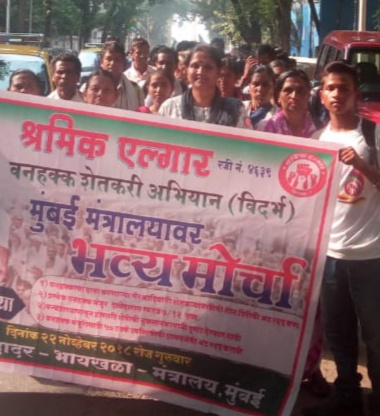 Agitation by farmers for recognition of forest rights

“My neighbour has got a patta because he is a tribal, but I cannot get it because I am a gair-adivasi a non-tribal” says Balkrushna Dumane of Navegaon village, Chandrapur whose application for individual forest rights has been rejected.
Scheduled Tribes and Other Traditional Forest Dwellers (Recognition of Forest Rights) Act, 2006 (FRA) divides claimants into two categories based on caste/tribe – Scheduled Tribes and Other Traditional Forest Dwellers (OTFD). Although on paper both groups are eligible for identical forest rights, the non-tribals including Dalits, ObCs, Nomadic Communities and minority groups are practically denied their rights because of certain additional conditions imposed on them by law.
Section 2(o) of the FRA defines ‘other traditional forest dwellers’ as any member or community who has for at least three generations prior to the 13th day of December, 2005 primarily resided in and who depend on the forest or forests land for bona fide livelihood needs. Explanation. For the purpose of this clause, generation means a period comprising of twenty-five years.
In effect the FRA has imposed two near-impossible criteria on the non-tribal OTFD community. Not only are they expected to prove residence in a particular area for three generations, they have to account for their residence for a total of 75 years prior to 2005 effectively from 1930. This condition is so harsh that a vast majority of OTFD cannot even make claim applications.
The brunt is being felt by communities in forested districts such as Chandrapur where more than 50% of the district’s land is marked as forest land leaving little for cultivation and other activities.
Thousands of non-tribal claimants like Dumane cannot meet the bar set by the teen pidhichi ut – three generations criteria. In 2020 the number of rejected claims of non-tribal applicants in Chandrapur alone was over 13000.
There is a growing demand for amending this provision to make it more equitable. Such demand is opposed by forest officials and environmental activists.
Some claimants of Brahmapuri sub-division of Chandrapur district belong to the fortunate minority who managed to access documentary evidence of their family’s residence prior to 1930. These evidences comprised of mainly of British-era revenue settlement records (called P-I records) of 1920s. Some kotwal records of births or deaths and a handful of house records were also dug up. However, their woes did not end because these colonial era documents did not record surnames and instead recorded the caste-names. Initially officials refused to accept these documents and hundreds of claims filed by non-tribals were rejected. Later the District Level Committee, Chandrapur agreed to review the cases. These review cases are still pending because of the pandemic situation.
Ironically only those claimants are able to produce old documents whose forefathers had agricultural property or were tenants of a landlord or malguzar. Communities who were totally landless or who lived a nomadic life, for instance the Dhivar community, are in a hopeless state Being landless they do not figure in colonial revenue records and being nomadic their births and deaths were not recorded. Therefore they have no evidence dating back to 1930. “Those whose grandfathers had land will get land now, those whose grandfathers were landless will remain landless now” puts Shantaram Ade of Sarandi village succinctly.
The records of many villages are not available, destroyed by fire or water, lost or are literally falling apart in pieces.
Gunvanta Ramteke of Rampuri village narrates how the forefathers of the present inhabitants came from outside and settled in Rampuri. “Our forefathers came here to escape floods or in search of livelihood. 1930 is such a long way back. People used to move all the time. How can we get residence proofs of that time?”
The Forest Rights Act is being seen as a casteist legislation which has unfairly deprived non-tribals. Since Forest Rights Act is a central legislation, only the parliament has the power to amend the law.
-Paromita Goswami

Why isn’t the Law of Torts Popular in India?

- Ishita Mahajan While I was reading the case files...