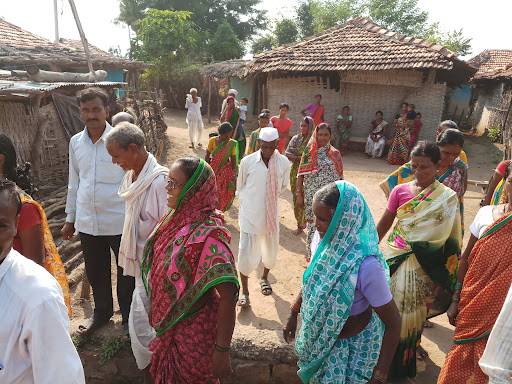 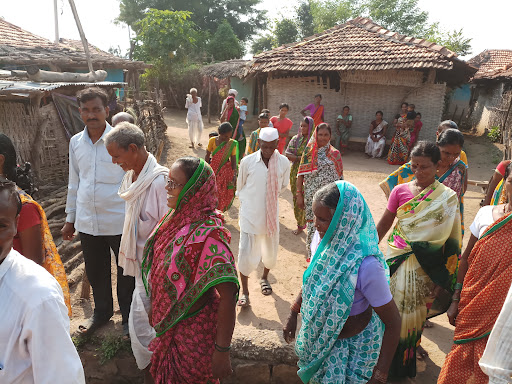 Recently the Adivasis of Navin Berdi village approached the High Court, Nagpur in a Public Interest Litigation asking for fair compensation for the houses and homesteads being acquired by the irrigation department for the Bhendala Medium Irrigation Project in Rajura Tehsil. A cursory look at the trials and tribulations being faced by the people of Navin Berdi and before them the struggle conducted by the villagers of Juni Berdi, show that laws for the rights of project-affected person remain on paper. Progressive laws do not automatically translate into justice without a long-drawn effort. It is further ironical that the government policies makes life hell for the very villagers who welcome state projects instead of opposing them. This is what happened in the case of the twin villages of Juni Berdi and Navin Berdi, both affected by the Bhendala irrigation project. 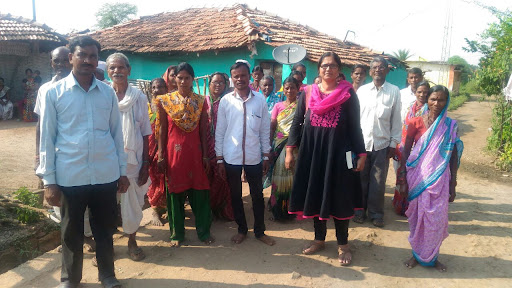 With the villagers of Juni Berdi who petitioned High Court, Nagpur

Juni BerdiThe Bhendala Project was proposed in the 1990s and Juni Berdi passed a Gram Sabha resolution welcoming the project and expressing a willingness to hand over land for the project. This Adivasi village faced the insecurity of losing gaothan (homestead land) as well as their agricultural fields and yet the people of Juni Berdi never opposed the project. All they wanted was that they should be adequately compensated for the homes and fields so that they could continue with life elsewhere.

Since 1990 the matter languished and the state agencies did not lift a finger for the rehabilitation of the Juni Berdi. Things became unbearable for the villagers because the government entirely stopped spending money for the welfare of the village. No allocations were made for things like construction of internal roads, maintenance of drains, repairs of the gram panchayat building and anganwadi etc. Those who could do so simply left the village. Others stayed behind and continued to struggle. The Adivasis met every new engineer and SDO asking for rehabilitation and compensation who got posted to Rajura but the discussions were in vain. It is not clear why exactly the bureaucracy moved at a snail’s pace, but the fact remains that they did so. 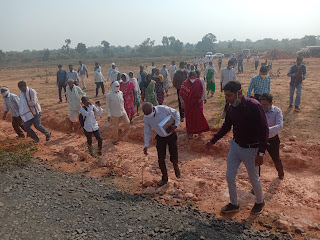 Villagers of Juni Berdi at the Rehabilitation Site, Bamanwada

Finally, in 2018, nearly thirty years after the sanction of the project, the villagers of Juni Berdi collected money and filed a writ petition in High Court, Nagpur and procured favourable orders for compensation for houses, homestead land and agricultural land and for rehabilitation at Bamanwada near the Tehsil town of Rajura. It is only because of the directions of the High Court that the awards for compensation were passed by the SDO Rajura and fair amounts given to the Adivasis of Juni Berdi. 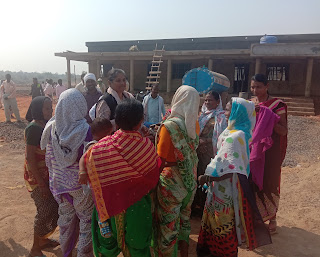 Discussion with Juni Berdi women at rehabilitation site, school being constructed in the background

The people of Navin Berdi are all landless people, mainly Adivasis, who came from different places at different points of time and built their huts outside the gaothan of Juni Berdi. Most of them were already living in Navin Berdi for more than twenty years when the Bhendala project was first discussed. Being landless, it was only their homes that were at stake and like Juni Berdi they wanted compensation for the houses and homestead land. Since there were only 80 families, the government agencies constructed a ‘rehabilitation site’ and asked the villagers to shift there. However, the construction at the rehabilitation site is either incomplete of such poor quality that it is already falling apart. 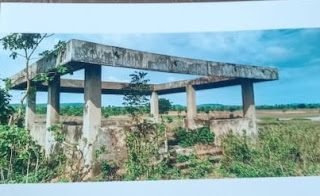 Moreover when the villagers asked about compensation for houses and homestead land, they were informed that the government would pay them ‘ex gratia’ amounts (not fair compensation) because they were ‘encroachers’ and not land owners. No amount of documentary evidence that the people were living in Navin Berdi for more than forty years and were regular house tax payers could convince the officials. 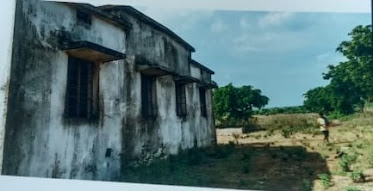 Frustrated, the people of Navin Berdi declared that they would not move to the rehabilitation site without the compensation for houses. Although the Right to Fair Compensation and Transparency in Land Acquisition, Rehabilitation and resettlement Act was passed by the Parliament in 2013, the clear provisions in favour of the villagers were completely ignored by the local bureaucracy.

When the people of Juni Berdi won their case, Navin Berdi saw a glimmer of hope. They too knocked on the doors of the High Court, Nagpur. Now that the High Court has taken cognizance of the matter, there is a possibility of justice being meted out to those who have waited too long for it.

Yet Another Ministerial Meeting on Chandrapur Human-Wildlife Conflict No Comprehensive...