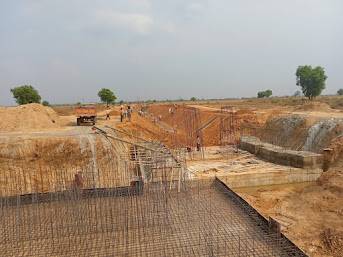 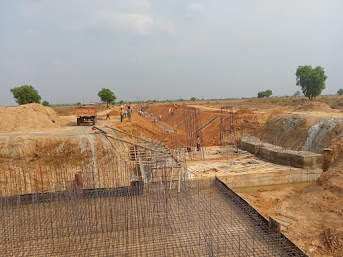 Ongoing Canal Work in Ghosari (Pombhurna) without compensation to farmers

In villages Ghosari (Pombhurna) and Bembad (Mul) of Chandrapur district, the irrigation department has forcibly entered agricultural lands of more than 60 farmers to construct the canals of Gosekhurd Major Irrigation Project without paying a single penny to the farmers as compensation. The work is going on since 2015 – 16 without following due process of law, and in fact by blatantly violating provisions of the Right to Fair Compensation and Transparency in Land Acquisition, Rehabilitation and Resettlement Act, 2013. This Act has clear provisions that the government cannot take possession of the land, leave alone initiate construction works, without first paying damages under section 12 and compensation under section 37. Even as acquisition and compensation process is pending before the Land Acquisition Officer, the irrigation department continues with its work in blatant violation of law and by neglecting the rights of the farmers who are suffering physically, mentally and financially ever day.

It is unfortunate that neither the guardian minister Vijay Wadettiwar, nor the member of parliament Balubhau Dhanorkar nor the MLA Sudhirbhau Mungantiwar are holding the irrigation department officials accountable for their violations of the law and the financial loss caused to the farmers. While the farmers are willing to cooperate and give their land for the canal, their only contention is that they should be paid their due compensation.

Every time a new law is passed, it creates a ripple of excitement that things will finally change for the better. But then soon we realize that a ripple is exactly that – a ripple. It is bound to die down. This does not mean that things revert back to the original position, rather we reach a new equilibrium – we are not left at exactly the old position nor do we reach the position promised by the new law, it is always incremental, two steps forward one step back.

Take for instance the new law Right to Fair Compensation and Transparency in Land Acquisition, Rehabilitation and Resettlement Act, 2013 (hereafter RFCTLARR Act) which was a huge step ahead of the colonial Land Acquisition Act, 1894. The RFCTLARR Act, 2013 envisaged a system to ensure that people whose land is acquired given proper hearing, that they have occasion to put forward their views regarding the public purpose for which the land is being acquired, the extent of land being acquired and the amount of compensation etc. Broadly, the contours of due process of acquisition that emerges through the various provisions can be summarised as follows:

(a) publication of preliminary notification that the government desires to acquire the land under section 11 of the RFTCTLARR (b) joint survey of the land to demarcate the actual boundaries of the land to be acquired under section 12 (c) Payment of damages for any damage to the property in the process of survey (d) Hearing the objections of project affected people regarding the public purpose, the extent of land being acquired, social impact assessment report. (e)publication of declaration of acquisition and summary of rehabilitation and resettlement under section 19, published in official gazette and two newspapers etc. (f) Hearing on claims of compensation (g) Final award on compensation under section 37 (h) power to take possession of land to be acquired.

Historically there have been problems regarding the coordination between the revenue department which is responsible for acquisition and payment of compensation on the one hand and the agency which is responsible for implementing the work, for instance the irrigation department. There are several government orders directing implementing agencies to submit proposals and informations required by the land acquisition officer without delay and initiate work only after payment of compensation as per the final award. The sad reality is that the new law could not overcome the these age old problems.

Further it is quite clear on paper at least, the government can take possession of the land only after payment of damages under section 12 and full compensation awarded under section 37. However, these provisions are being violated with impunity on the ground. The canal construction of the Gosekhurd Major Irrigation project is in full swing in Chandrapur district, and even before the publication of the declaration under section 19, the land is forcibly taken in possession by the irrigation department and the farmers are left running from pillar to post for compensation.

In village Ghosari, block Pombhurna the preliminary notification was published in 2019 even though the irrigation department entered the land in 2015 and started the work without paying a single paisa to the farmers. The joint survey under section 12 was delayed by more than nine months by the Land Records department which has created further delays in award and payments. Meanwhile the work is progressing in full force. Similarly, in village Bembal, block Mul the farmers are facing a similar situation. The final award of compensation is yet to be finalised under section 37, even though the irrigation department is working on the canal.

The irony is that even after the government takes the land in possession under section 38 after payment of compensation, even then the irrigation department does not have the right to initiate work. A government resolution passed in 1972 states that land acquired by government vests with the revenue department and has to be handed over to the relevant department before the work is initiated.

It appears that neither the new law nor the old policies is able is to protect the common people, the bureaucracy finds ways to violate rights of the farmers on the ground. 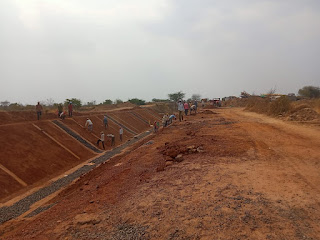